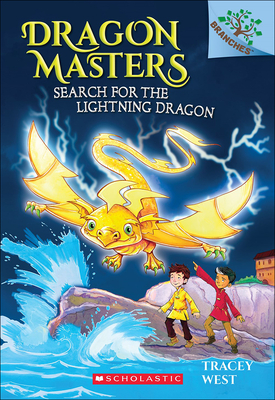 This is book number 7 in the Dragon Masters series.

Pick a book. Grow a Reader
This series is part of Scholastic's early chapter book line, Branches, aimed at newly independent readers. With easy-to-read text, high-interest content, fast-paced plots, and illustrations on every page, these books will boost reading confidence and stamina. Branches books help readers grow
In book #7, the Dragon Masters have to track down the Lightning Dragon But first, they need to find his Dragon Master -- a boy named Carlos. The Lightning Dragon shoots dangerous sparks of energy Will Carlos be able to connect with his wild dragon? Or does a darker master have plans for the Lightning Dragon?

Tracey West has written more than 200 books for children and young adults, including the following series: Pixie Tricks, Hiro s Quest, and Dragon Masters. She has appeared on "The New York Times" bestseller list as author of the Pokemon chapter book adaptations. Tracey currently lives with her family in New York State s Hudson Valley. She can be found on twitter at @TraceyWestBooks.

Damien Jones spent his childhood daydreaming and drawing. He attended the Arts Institute of Bournemouth where he gained a BA Hons in Animation Production. He worked as an animator on films like the Oscar-nominated feature film "L'illusionniste" (2010) before begin his career in book illustrating. He has worked with publishers such as Simon & Schuster, Random House, and Scholastic. He lives in Cornwall, UK with his family."

Attack of the Black Rectangles (Hardcover)

A perfect book now for young readers during our fraught fights for intellectual freedom, King brings 12-year old Mac and his friends fully into the conversation and solution by trusting their intellect and moxie. Just the story -- albeit based on the author's real life issue -- to hand to curious young readers about book censorship. Added bonus -- a fully developed intergenerational subplot. Superb!