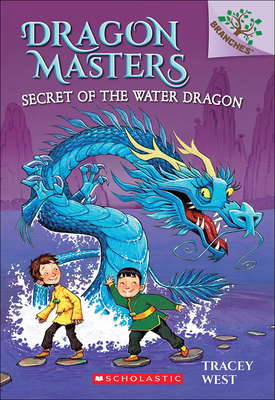 This is book number 3 in the Dragon Masters series.

Drake and the rest of the Dragon Masters are back for another adventure
This series is part of Scholastic's early chapter book line called Branches, which is aimed at newly independent readers. With easy-to-read text, high-interest content, fast-paced plots, and illustrations on every page, these books will boost reading confidence and stamina. Branches books help readers grow
In this third book in the series, someone is trying to steal the Dragon Stone. Drake soon discovers that the thief is his friend and fellow Dragon Master, Bo Could the dark wizard somehow be behind this? The Dragon Masters must find a way to protect the Dragon Stone--and keep Bo's family out of danger. Will the secret to solving their problems lie with Bo's dragon, Shu? Drake is about to find out.

Tracey West has written more than 200 books for children and young adults, including the following series: Pixie Tricks, Hiro s Quest, and Dragon Masters. She has appeared on The New York Times bestseller list as author of the Pokemon chapter book adaptations. Tracey currently lives with her family in New York State s Hudson Valley. She can be found on twitter at @TraceyWestBooks. Graham Howells is a children s book author and illustrator. He also produces artwork for games, television, and film. Howells won the 2009 English Tir na n-Og Award for his book MERLIN S MAGICAL CREATURES. "