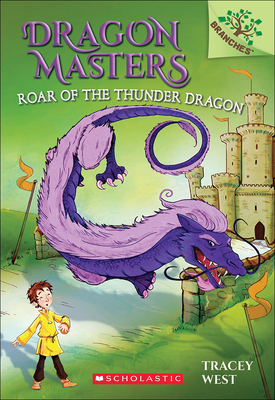 This is book number 8 in the Dragon Masters series.

Pick a book. Grow a Reader

In book #8, Drake and the rest of the Dragon Masters are searching for Lalo the baby Lightning Dragon Lalo was kidnapped by Eko -- Griffith's first Dragon Master. Eko ran away with her Thunder Dragon, Neru, years ago. Now she's back and she wants to kidnap every dragon in the kingdom Can Drake and the other Dragon Masters rescue Lalo and stop Eko before it's too late?

Tracey West has written more than 200 books for children and young adults, including the following series: Pixie Tricks, Hiro's Quest, and Dragon Masters. She has appeared on The New York Times bestseller list as author of the Pokemon chapter book adaptations. Tracey currently lives with her family in New York State's Hudson Valley. She can be found on twitter at @TraceyWestBooks.Damien Jones spent his childhood daydreaming and drawing. He attended the Arts Institute of Bournemouth where he gained a BA Hons in Animation Production. He worked as an animator on films like the Oscar-nominated feature film L'illusionniste (2010) before beginning his career in book illustration. He has worked with publishers such as Simon & Schuster, Random House, and Scholastic. He lives in Cornwall, UK with his family.