I'll Never Get Out of This World Alive (Hardcover) 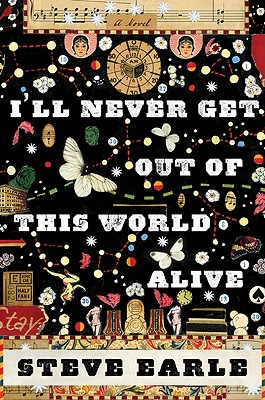 By Steve Earle
Not available
Out of Print

In 1963, ten years after Hank's death, Doc himself is wracked by addiction. Having lost his license to practice medicine, his morphine habit isn't as easy to support as it used to be. So he lives in a rented room in the red-light district on the south side of San Antonio, performing abortions and patching up the odd knife or gunshot wound. But when Graciela, a young Mexican immigrant, appears in the neighborhood in search of Doc's services, miraculous things begin to happen. Graciela sustains a wound on her wrist that never heals, yet she heals others with the touch of her hand. Everyone she meets is transformed for the better, except, maybe, for Hank's angry ghost—who isn't at all pleased to see Doc doing well.

A brilliant excavation of an obscure piece of music history, Steve Earle's I'll Never Get Out of This World Alive is also a marvelous novel in its own right, a ballad of regret and redemption, and of the ways in which we remake ourselves and our world through the smallest of miracles.

STEVE EARLE is a singer-songwriter, actor, activist, and the author of a Los Angeles Times Book of the Year, the story collection Doghouse Roses. He has released more than a dozen critically acclaimed albums, including the Grammy winners The Revolution Starts Now, Washington Square Serenade, and Townes. He has appeared on film and television, with celebrated roles in The Wire and Treme. His album entitled I’ll Never Get Out of This World Alive was produced by T Bone Burnett. He often tours with his wife, singer-songwriter Allison Moorer.

"Earle (a hell of a songwriter himself) has written a deft, big-spirited novel about sin, faith, redemption, and the family of man." --Entertainment Weekly"Earle draws on the rough-and-tumble tenderness in his music to create a witty, heartfelt story of hope, forgiveness, and redemption."--Booklist"In this spruce debut novel...hard-core troubadour Earle ponders miracles, morphine and mortality in 1963 San Antonio... With its Charles Portis vibe and the author's immense cred as a musician and actor, this should have no problem finding the wide audience it deserves."--Publishers Weekly"A thematically ambitious debut novel that draws from the writer's experience, yet isn't simply a memoir in the guise of fiction...richly imagined..."--Kirkus Reviews, starred"Steve Earle brings to his prose the same authenticity, poetic spirit and cinematic energy he projects in his music. I’ll Never Get Out of This World Alive is like a dream you can't shake, offering beauty and remorse, redemption in spades." —Patti Smith". . . a doctor, a Mexican girl, an Irish priest, the ghost of Hank Williams, and JFK the day before he dies. This subtle and dramatic book is the work of a brilliant songwriter who has moved from song to orchestral ballad with astonishing ease." —Michael Ondaatje "A rich, raw mix of American myth and hard social reality, of faith and doubt, always firmly rooted in a strong sense of character." —Charles Frazier"Steve Earle writes like a shimmering neon angel." —Kinky Friedman "Earle has created a potent blend of realism and mysticism in this compelling, morally complex story of troubled souls striving for a last chance at redemption. Musician, actor, and now novelist—is there another artist in America with such wide-ranging talent?" —Ron Rash "The characters are unforgettable, and the plot moves like a fast train. A fantastic mixture of hard reality and dark imagination." —Thomas Cobb "Raw, honest and unafraid, this novel veers in and out of the lives of its many memorable characters with flawless pitch. Earle has given us dozens of remarkable songs, he has given us a dazzling collection of short stories, and now here's his first novel, a doozy from a great American storyteller." —Tom Franklin"A haunting and haunted bookend to Irving’s Cider House Rules. Gritty and transcendent, Earle has successfully created his own potion of Texas, twang, and dope-tinged magic-realism."
—Alice Randall"If Jesus were to return tomorrow to twenty-first-century America, and do some street preaching on the gritty South Presa Strip of San Antonio, he’d love Earle’s magnificently human, big-hearted drifters." —Howard Frank Mosher "Colorful, cool, and downright gripping." —Robert Earl Keen"Reads like the best of Steve Earle’s story songs, which means real good. The tale of a more charmingly haunted, trying-to-do-the-right-thing dope fiend you won’t easily find."—Mark Jacobson "The best book I've read since The Road. As much or more than any other artist of his generation Steve Earle rises to the call, culturally and politically, traditionally in folk and country and rock music and what he’s added there, and with acting and writing for theater, and now with all the literary forms crescendoing in this beautiful novel. He just keeps stepping up." —R. B. Morris"Steve Earle astonishes us yet again. Country Rock's outlaw legend brings the ghost of Hank Williams to life in a gloriously gritty first novel that soars like a song. And echoes in the heart." —Terry Bisson
"A mighty fine piece of storytelling." —Madison Smartt Bell