May We Be Forgiven (Hardcover) 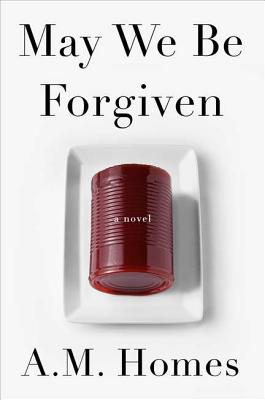 By A. M. Homes
Not available
Out of Print

“Homes' latest darkly comic novel is more poignant and moving than it appears at first glimpse, and the rudderless, hapless Nixon scholar Harold Silver's year in the wilderness is more eye-opening than he can at first admit to himself. As Harry grows and grieves in his own way over the course of the insanity-laced year, we are happily along for the ride, unquestioningly loving the person he becomes. A truly remarkable feat of storytelling that both pulsates with the underlying ache of loss and manages to crack a couple of your ribs when you laugh too hard.”
— Seth Marko, UCSD Bookstore, La Jolla, CA

Winner of the 2013 Women's Prize for Fiction A darkly comic novel of twenty-first-century domestic life and the possibility of personal transformation
Harold Silver has spent a lifetime watching his younger brother, George, a taller, smarter, and more successful high-flying TV executive, acquire a covetable wife, two kids, and a beautiful home in the suburbs of New York City. But Harry, a historian and Nixon scholar, also knows George has a murderous temper, and when George loses control the result is an act of violence so shocking that both brothers are hurled into entirely new lives in which they both must seek absolution.
Harry finds himself suddenly playing parent to his brother's two adolescent children, tumbling down the rabbit hole of Internet sex, dealing with aging parents who move through time like travelers on a fantastic voyage. As Harry builds a twenty-first-century family created by choice rather than biology, we become all the more aware of the ways in which our history, both personal and political, can become our destiny and either compel us to repeat our errors or be the catalyst for change.
"May We Be Forgiven" is an unnerving, funny tale of unexpected intimacies and of how one deeply fractured family might begin to put itself back together.

A. M. Homes is the author of the memoir "The Mistress s Daughter" and the novels "This Book Will Save Your Life, Music for Torching, The End of Alice, In a Country of Mothers, " and "Jack, " as well as the story collections "The Safety of Objects" and "Things You Should Know." She lives in New York City."

Praise for May We Be Forgiven

“An entertaining, old-fashioned American story about second chances…A.M. Homes is a writer I’ll pretty much follow anywhere because she’s indeed so smart, it’s scary; yet she’s not without heart…May We Be Forgiven [is] deeply imbued with the kind of It’s A Wonderful Life-type belief in redemption that we Americans will always be suckers for, and rightly so.” —Maureen Corrigan, Fresh Air
“Cheever country with a black comedy upgrade…Homes crams a tremendous amount of ambition into May We Be Forgiven, with its dark humor, its careening plot, its sex-strewn suburb and a massive cast of memorable characters...its riskiest content, however, is something different: sentiment.  This is a Tin Man story, in which the zoned-out Harry slowly grows a heart.” —Carolyn Kellogg, The Los Angeles Times
“Darkly funny…the moments shared between this ad hoc family are the novel’s most endearing…Homes’ signature trait is a fearless inclination to torment her characters and render their failures, believing that the reader is sophisticated enough – and forgiving enough – to tag along.”  —Katie Arnold-Ratliff, Time Magazine
“Homes, whose masterful handling of suburban dystopia merits her own adjective, may have just written her midcareer magnum opus with this portrait of a flawed Nixonian bent on some sort of emotional amnesty.” —Christopher Bollen, Interview
“At once tender and uproariously funny…one of the strangest, most miraculous journeys in recent fiction, not unlike a man swimming home to his lonely house, one swimming pool at a time:  it is an act of desperation turned into one of grace.” —John Freeman, The Cleveland Plain Dealer
“A big American story with big American themes, the saga of the triumph of a new kind of self-invented nuclear family over cynicism, apathy, loneliness, greed, and technological tyranny…this novel has a strong moral core, neither didactic nor judgmental, that holds out the possibility of redemption through connection.”  –Kate Christensen, Elle
“Heartfelt, and hilarious…Although Homes weaves in piercing satire on subjects like healthcare, education, and the prison system, her tone never veers into the overly arch, mostly thanks to Harold – a loveably earnest guy who creates his own kind of oddball, 21st century family.” –Leigh Newman, O The Oprah Magazine
“A.M. Homes has long been one of our most important and original writers of fiction. May We Be Forgiven is her most ambitious as well as her most accessible novel to date; sex and violence invade the routines of suburban domestic life in a way that reminded me of The World According to Garp, although in the end it’s a thoroughly original work of imagination.” –Jay McInerney
“This novel starts at maximum force -- and then it really gets going. I can't remember when I last read a novel of such narrative intensity; an unflinching account of a catastrophic, violent, black-comic, transformative year in the history of one broken American family. Flat-out amazing.” —Salman Rushdie

“I started this book in the A.M., finished in the P.M., and couldn’t sleep all night. Ms. Homes just gets better and better.” —Gary Shteyngart

“What if whoever wrote the story of Job had a sense of humor?  Nixon is pondered.  One character donates her organs.  Another tries to grow a heart.  A seductive minefield of a novel from A.M. Homes.” —John Sayles

“I started reading A.M. Homes twenty years ago. Wild and funny, questioning and true, she is a writer to go travelling with on the journey called life.” —Jeanette Winterson