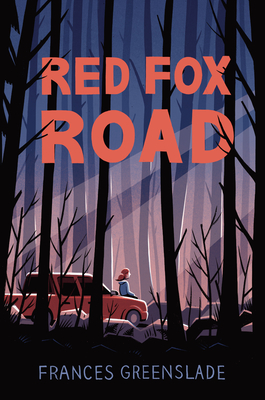 By Frances Greenslade
$16.99
Recently On Our Shelves

Great adventure tale about 13-year old Francie as she survives in the Oregon wilderness – alone – for nearly 2 weeks after her family gets lost on a road trip from British Columbia to the Grand Canyon. After both parents – separately – go opposite ways trying to find help, Francie calls up all her wits, ingenuity and luck to endure harsh elements, animal encounters, lack of food & water and her own, sometimes raw, emotions. Readers will be rooting for Feisty Francie in this fast paced, can’t-put-down survival story.

A thirteen-year-old girl on a family vacation becomes stranded alone in the wilderness when the family's GPS leads them astray. A compelling survival story for ages 10 to 14, for fans of Hatchet and The Skeleton Tree.

Francie and her parents are on a spring road trip: driving from British Columbia, Canada, to hike in the Grand Canyon. When a shortcut leads them down an old logging road, disaster strikes. Their truck hits a rock and wipes out the oil pan. They are stuck in the middle of nowhere. Francie can't help feeling a little excited -- she'd often imagined how she'd survive if she got stranded in the bush, and now here they are. But will her survival skills -- building fires, gathering dandelion leaves and fir needles for tea -- be enough when hours stretch into days?

FRANCES GREENSLADE was born in St. Catharines, Ontario, and has since lived in Manitoba, Saskatchewan and British Columbia. She has a BA in English from the University of Winnipeg and an MFA in Creative Writing from UBC. Her first book, a travel memoir called A Pilgrim in Ireland: A Quest for Home, won the Saskatchewan Book Award for Non-Fiction. Her second memoir, By the Secret Ladder: A Mother's Initiation, was published in 2007, and her novel, Shelter, was published in 2011. Greenslade teaches English at Okanagan College in Penticton, BC. Red Fox Road is her first novel for young readers.
www.francesgreenslade.com @franciegreenslade (Instagram)

"Frances Greenslade is brilliant in her portrayal of the half-suspected world that lies just beyond the senses of every thirteen year old. The book's a triumph." --Alan Bradley, bestselling author of the Flavia de Luce series