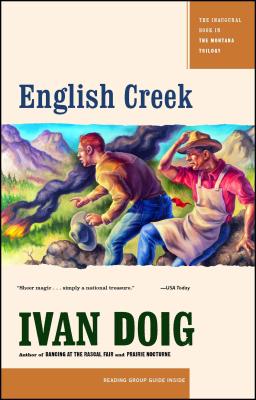 
Available to Order from Our Warehouse
In this prize-winning portrait of a time and place—Montana in the 1930s—that at once inspires and fulfills a longing for an explicable past, Ivan Doig has created one of the most captivating families in American fiction, the McCaskills.

The witty and haunting narration, a masterpiece of vernacular in the tradition of Twain, follows the events of the Two Medicine country's summer: the tide of sheep moving into the high country, the capering Fourth of July rodeo and community dance, and an end-of-August forest fire high in the Rockies that brings the book, as well as the McCaskill family's struggle within itself, to a stunning climax. It is a season of escapade as well as drama, during which fourteen-year-old Jick comes of age. Through his eyes we see those nearest and dearest to him at a turning point—“where all four of our lives made their bend”—and discover along with him his own connection to the land, to history, and to the deep-fathomed mysteries of one’s kin and one’s self.
Ivan Doig (1939-2015) was a third-generation Montanan and the author of sixteen books, including the classic memoir This House of Sky and most recently Last Bus to Wisdom. He was a National Book Award finalist and received the Wallace Stegner Award, among many other honors. Doig lived in Seattle with his wife, Carol. Visit IvanDoig.com.

"Commonly compared with Paul Horgan and Wallace Stegner...Doig seems something else. A truer comparison might be with Robert Louis Stevenson because of Doig's magical welding of history into fiction, of adventure with everyday life, of legend with lore."
-- The Washington Post

"Here is the real Montana, the real West, through the eyes of a real writer."
-- Wallace Stegner