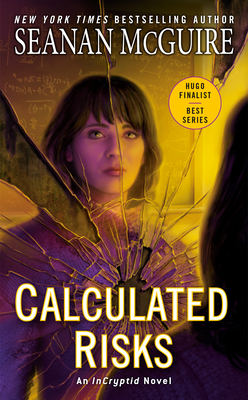 This is book number 10 in the InCryptid series.

The tenth book in the fast-paced InCryptid urban fantasy series returns to the mishaps of the Price family, eccentric cryptozoologists who safeguard the world of magical creatures living in secret among humans.

Just when Sarah Zellaby, adopted Price cousin and telepathic ambush predator, thought that things couldn't get worse, she's had to go and prove herself wrong. After being kidnapped and manipulated by her birth family, she has undergone a transformation called an instar, reaching back to her Apocritic origins to metamorphize. While externally the same, she is internally much more powerful, and much more difficult to control.

Even by herself. After years of denial, the fact that she will always be a cuckoo has become impossible to deny.

Now stranded in another dimension with a handful of allies who seem to have no idea who she is--including her cousin Annie and her maybe-boyfriend Artie, both of whom have forgotten their relationship--and a bunch of cuckoos with good reason to want her dead, Sarah must figure out not only how to contend with her situation, but with the new realities of her future. What is she now? Who is she now? Is that person someone she can live with?

And when all is said and done, will she be able to get the people she loves, whether or not they've forgotten her, safely home?
Seanan McGuire is a Hugo, Nebula, and Locus award-winning author. The October Daye novels are her first urban fantasy series, and the InCryptid novels are her second series, both of which have put her on the New York Times bestseller list and the Hugo ballot. She is the first person to be nominated for five Hugo Awards in a single year.
Nominated for the 2020 Hugo Award for Best Series

Praise for the InCryptid novels

"[Half-Off Ragnarok] is kind of like taking a tour through a very deadly theme park made up of alternating parts awesome and terrifying. Come to think of it, that sums up this series quite nicely.... This book effectively acts as a jumping-on point to those just coming in." —Tor.com

"McGuire creates a sense of wonder and playfulness with her love for mythology and folklore.... Her enthusiastic and fast-paced style makes this an entertaining page-turner." —Publishers Weekly

"McGuire’s InCryptid series is one of the most reliably imaginative and well-told sci-fi series to be found.... McGuire’s heroine is a brave, resourceful and sarcastic delight, and her intrepid comrades are just the kind of supportive and snarky sidekicks she needs." —RT Reviews

"While chock-full of quality worldbuilding, realistic characters, and a double helping of sass, at its core, Half-Off Ragnarok is a book about judging others according to stereotypes, how nurture can overcome nature, and the importance of family." —Ranting Dragon

"The InCryptid series continues to be storytelling at its best. Tricks for Free sends us on a rollercoaster of emotions and thrills with its engaging plot and ever-expanding and fascinating world." —All Things Urban Fantasy

"Imaginary Numbers is a stunning installment and one that every urban fantasy reader is sure to relish." —Fresh Fiction