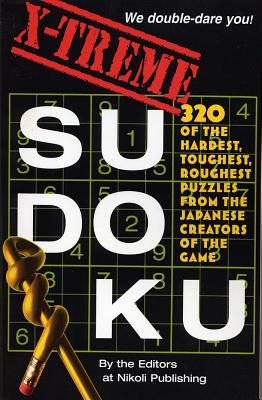 By Editors of Nikoli Publishing
List Price: $10.95
Our Price: $9.95
(Save: $1.00 9%)
Recently On Our Shelves
The next step, like having a whole book of just Saturday Times crossword puzzles. Even more fiendish, even more fun, X-treme Sudoku proudly presents 320 puzzles rated "Difficult" to "Very Difficult." These are the toughest, knottiest, most demanding Sudoku out there—prepare to have your brain cells crackle, your pencils melt, your mind obsessed with numbers and squares.

No one is better than Nikoli at rounding up such a collection. A Japanese puzzle and game company that started the Sudoku craze over twenty years ago, Nikoli is known for creating the only handcrafted puzzles around. As Tim Preston, publishing director of Puzzler Media, Britain's biggest seller of crossword and cryptogram puzzles, has said: "It is a matter of great pride to get your puzzle into one of Nikoli's magazines. Handmade puzzles are much better. . . . It gives you the satisfaction that you are pitting your wits against an individual who has thought about what your next step would be and has tried to obscure the path."

For X-treme Sudoku, the puzzle-makers at Nikoli went out of their way to obscure the path. There are puzzles with entire boxes empty. Puzzles with whole rows left blank. Puzzles that form mysteriously beautiful symmetries, but demand a calculating logic to solve.

For the X-treme solver, paradise.
Nikoli is the Japanese puzzle and game company that’s been nurturing and developing sudoku for over thirty-five years. They hold the trademark on sudoku in Japan, and supply 100 percent of the puzzles published in Japanese newspapers and magazines.