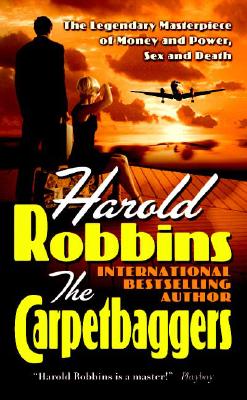 By Harold Robbins
$7.99
Not Available - Possibly Out of Print

A LEGENDARY MASTERPIECE
A STORY OF MONEY AND POWER,
SEX AND DEATH

Jonas Cord coveted his father's fame, fortune, even his young, beautiful wife.  When his father died, Jonas swore to possess them all.  But Rina Marlow was the celebrated screen goddess no man could master.  Her sizzling sensuality might inflame and enthrall millions, but her personal boudoir was no Hollywood fantasy.  She consumed her lovers on the fiery rack of her burning desires.
Rina and Jonas took Hollywood, the airplane industry, America itself by storm.  From New York to LA they brawled, lusted, and carved out an empire, blazoned in banner headlines and their enemies' blood--only to learn that money and power, revenge and renown were not enough.  Too much would never be enough--not for Jonas Cord and the relentless Rina Marlowe.  The higher they soared, the more their ambition demanded . . . the darker and deadlier their fiery passions grew.

Born in New York City, HAROLD ROBBINS is one of the world's bestselling authors, writing novels that often mirrored his own experiences and that were peopled by charcacters he had met.

"Robbins dialogue is moving . . . his people have the warmth of life."--The New York Times

"Robbins's books are packed with action, sustained by a strong narrative drive, and are given vitality by his own colorful life."  The Wall Street Journal