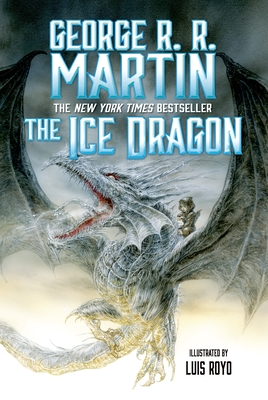 The Ice Dragon is an enchanting tale of courage and sacrifice for young readers and adults by the wildly popular author of the #1 New York Times bestselling Song of Ice and Fire series, George R.R. Martin. Lavish illustrations by acclaimed artist Luis Royo enrich this captivating and heartwarming story of a young girl and her dragon.

In the world of A Song of Ice and Fire the ice dragon was a creature of legend and fear, for no man had ever tamed one. When it flew overhead, it left in its wake desolate cold and frozen land. But Adara was not afraid. For Adara was a winter child, born during the worst freeze that anyone, even the Old Ones, could remember.

Adara could not remember the first time she had seen the ice dragon. It seemed that it had always been in her life, glimpsed from afar as she played in the frigid snow long after the other children had fled the cold. In her fourth year she touched it, and in her fifth year she rode upon its broad, chilled back for the first time. Then, in her seventh year, on a calm summer day, fiery dragons from the North swooped down upon the peaceful farm that was Adara's home. And only a winter child—and the ice dragon who loved her—could save her world from utter destruction.

This illustrated edition of The Ice Dragon is sure to become a collector's item for fans of HBO's megahit Game of Thrones.

George R. R. Martin has been a full-time writer for over 25 years. He is the author of the acclaimed, internationally bestselling fantasy series A Song of Ice and Fire, which is the basis of HBO's popular Game of Thrones television series. Martin has won multiple science fiction awards, including 4 Hugos, 2 Nebulas, the Bram Stoker, the Locus Award, the World Fantasy Award, the Daedelus, the Balrog, and the Daikon (Japanese Hugo).

LUIS ROYO is a prolific Spanish artist best known for his lush fantasy illustrations. Over 30 books of his collected art have been published including Women, Dead Moon, and the Malefic Time series. Royo’s artwork is featured in Spectrum 3 and has been exhibited in Barcelona, Madrid, Milan, New York, Seattle, and St. Petersburg.

“The Ice Dragon brims with the magic and beauty of Martin's velvety rich prose. […] Audiences of all ages will be enchanted by the fantastic delivery of this timeless tale of heroes and dragons, the strength of a family, and the coming-of-age of a very special girl. It is a great book to share.” —VOYA

“[T]his fantasy is a slim but rich introduction to the genre, one that should appeal to both boys and girls.” —School Library Journal

“A must-buy for all Martin fans.” —SFRevu

“Like the type, Royo's lush ink-and-wash illustrations are all set in blue, heightening the icy feel. They sprawl across spreads, complementing the generously leaded text and providing ample resting place for readers' eyes. Despite the war and destruction, this is very much a children's story, told in a distantly folkloric tone that evokes the stylings of Jane Yolen. Adult fans will find neither gore nor sex, but kids will find an evocative original fairy tale with an unexpectedly complex protagonist.” —Kirkus Reviews