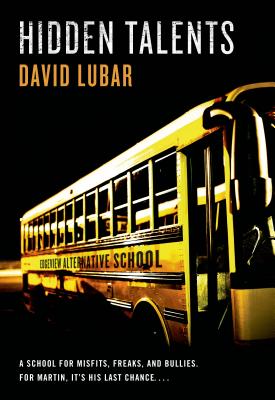 This is book number 1 in the Talents series.

Hidden Talents is the first novel in a hit supernatural duology for young readers by award-winning author David Lubar. This hilarious coming-of-age-with-powers story starring the misfits at Edgeview Alternative School was shortlisted for the Printz Award and is now available in trade paperback.

When thirteen-year-old Martin Anderson arrives at the Edgeview Alternative School, it's the end of the road. Literally. He's been expelled from every other school. Edgeview is the last stop. A warehouse for the system's rejects.

Everyone has given up on Martin. Even Martin. But at Edgeview Martin falls in with a group of five outsiders who make the other Edgeview rejects appear gifted by comparison. He makes a remarkable discovery: each of his friends possesses a remarkable talent. One is telekinetic. Another is empathic. Others have psychic abilities. Martin thinks these talents make them special. They think it makes them freaks.

Martin has one shot to convince them otherwise.

"Hidden Talents provides us with a glimpse of David Lubar as a writer whose comic talent is matched by his ability to write with sensitivity and power about adolescents." —The Alan Review

David Lubar created a sensation with his debut novel, Hidden Talents, an ALA Best Book for Young Adults. Thousands of kids and educators across the country have voted Hidden Talents onto over twenty state lists. David is also the author of True Talents, the sequel to Hidden Talents; Flip, an ALA Best Book for Young Adults and a VOYA Best Science Fiction, Fantasy and Horror selection; many short story collections including In the Land of the Lawn Weenies, Invasion of the Road Weenies, The Curse of the Campfire Weenies, The Battle of the Red Hot Pepper Weenies, Attack of the Vampire Weenies, Beware the Ninja Weenies, Wipeout of the Wireless Weenies, Strikeout of the Bleacher Weenies, and Extremities; and the Nathan Abercrombie, Accidental Zombie series. Lubar grew up in Morristown, New Jersey, and he has also lived in New Brunswick, Edison and Piscataway, NJ, and Sacramento, CA. Besides writing, he has also worked as a video game programmer and designer. He now lives in Nazareth, Pennsylvania.

“At a time when truly humorous young adult fiction is scarce, reading Lubar's first YA novel (a coming of age story) is like finding a nest of kittens in a hayloft--wondrously surprising, playful, and heartwarming.” —VOYA (5Q, 4P, M, J)

“Hidden Talents provides us with a glimpse of David Lubar as a writer whose comic talent is matched by his ability to write with sensitivity and power about adolescents.” —The Alan Review

“On the whole Lubar serves up great fun, along with an insight or two for those whose powers are only too human.” —Publishers Weekly

“[T]he interrelationships between the five misfits and their interactions with the teachers are credible, and the dialogue is right on target. With plenty of humor, this is a good bet for reluctant readers as well as for kids who like offbeat fiction.” —Booklist

“Hidden Talents is becoming--and deserves to be--a classic of YA literature. It's one of the best, no matter what age you are.” —Orson Scott Card, bestselling author of Ender's Game