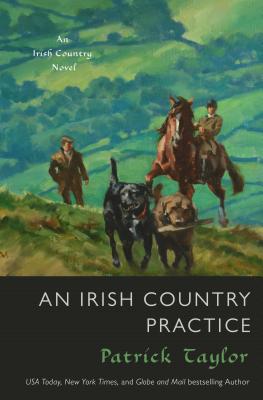 This is book number 12 in the Irish Country Books series.

Once, not too long ago, there was just a single Irish country doctor tending to the lively little village of Ballybucklebo: Doctor Fingal Flahertie O’Reilly. Now his thriving practice is growing by leaps and bounds.

Not only has O’Reilly taken a new trainee under his wing, Doctor Connor Nelson, he’s also added a spirited Labrador puppy to his ever-expanding household at Number One Main Street. Meanwhile, his trusted partner, young Doctor Barry Laverty, finds himself wondering if he’s truly ready to settle down and start a family with his lovely fiancée, Sue.

As the doctors cope with domestic and professional challenges, they also look after their patients and their ailments, including a mysterious cough, a housewife whose frequent “accidents” may have a disturbing cause, and a respected colleague who might be succumbing to an old vice.

All is not sickness and worry, however. There’s plenty of joy and merriment to be found as well, from a visiting circus to racing to sailing . . . and maybe even a happy ending or two.

“Gentle humor, deeply emotional stories drawn from everyday life.” —Kirkus Reviews on An Irish Doctor in Love and at Sea

"Deeply steeped in Irish country life and meticulous in detail, the story is the perfect companion for a comfy fire and a cup of tea or a pint of bitter. A totally wonderful read!" —Library Journal, starred review, on An Irish Doctor in Peace and at War