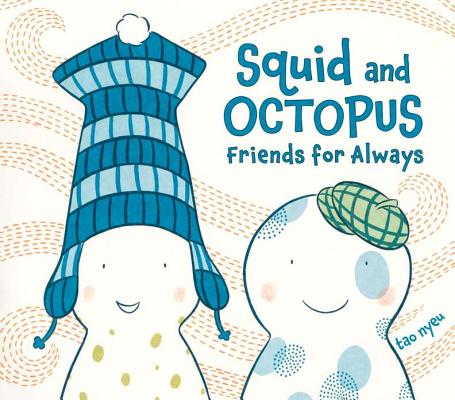 “Tao Nyeu can work miracles with a simple color palette, spare lines, and gentle, lovely text. Squid and Octopus are true friends. They disagree but don't argue. They pick each other up when down. And they are charmingly oblivious to their eccentric tastes in socks, gloves, or whatever. Another work of genius from Nyeu!”
— Elizabeth Anker, Alamosa Books, Albuquerque, NM

An award-winning author presents a delightful picture book about friendship under the sea. For fans of Jon Klassen’s This is Not My Hat and Oliver Jeffers’ This Moose Belongs to Me.

The four tales in this charming picture book show funny moments in the life of best friends Squid and Octopus. Yes, they argue sometimes (about things as silly as whether they should wear mittens or socks to keep their tentacles warm!), but they are always able to cheer each other up in glum times (such as when Squid wakes from the dream of being a superhero and feels disappointed to be plain old Squid again).

They are a very lucky pair. And as the fortune cookie in the last story says, true friends are friends for always.


“This positive, upbeat, and comforting bundle is sure to bring smiles. A good choice for goofy, interactive read-alouds.”—Booklist (starred review)

“Readers may find themselves turning the pages as if carried along by a gentle but unstoppable wave.”—Publishers Weekly

“Inventive, quirky, gentle, and sweet.”—School Library Journal
Tao Nyeu is the creator of Wonder Bear, which won the Founder's Award from the Society of Illustrators and a Marion Vannett Ridgway Award Honor; and Bunny Days, which won the Ezra Jack Keats Award and a Golden Kite Award Honor. Tao was born in Ohio and grew up in New York. She earned a BFA from Cornell University and an MFA from the School of Visual Arts. She now lives in Southern California.