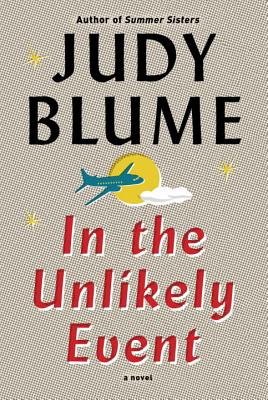 In her highly anticipated new novel, Judy Blume, the New York Times # 1 best-selling author of Summer Sisters and of young adult classics such as Are You There God? It’s Me, Margaret, creates a richly textured and moving story of three generations of families, friends and strangers, whose lives are profoundly changed by unexpected events.

In 1987, Miri Ammerman returns to her hometown of Elizabeth, New Jersey, to attend a commemoration of the worst year of her life. Thirty-five years earlier, when Miri was fifteen, and in love for the first time, a succession of airplanes fell from the sky, leaving a community reeling. Against this backdrop of actual events that Blume experienced in the early 1950s, when airline travel was new and exciting and everyone dreamed of going somewhere, she paints a vivid portrait of a particular time and place—Nat King Cole singing “Unforgettable,” Elizabeth Taylor haircuts, young (and not-so-young) love, explosive friendships, A-bomb hysteria, rumors of Communist threat. And a young journalist who makes his name reporting tragedy. Through it all, one generation reminds another that life goes on.

In the Unlikely Event is vintage Judy Blume, with all the hallmarks of Judy Blume’s unparalleled storytelling, and full of memorable characters who cope with loss, remember the good times and, finally, wonder at the joy that keeps them going.

Early reviewers have already weighed in: “Like many family stories, this one is not without its life-changing secrets and surprises. There is no surprise that the book is smoothly written, and its story compelling. The setting—the early 1950s—is especially well realized through period references and incidents.” —Booklist (starred review) and “In Blume’s latest adult novel . . . young and old alike must learn to come to terms with technological disaster and social change. Her novel is characteristically accessible, frequently charming and always deeply human.” —Publishers Weekly

From the Hardcover edition.

Judy Blume is one of America’s most beloved authors. She grew up in Elizabeth, New Jersey, and was a teenager in 1952 when the real events in this book took place. She has written books for all ages. Her twenty-eight previous titles include Are You There God? It’s Me, Margaret; Forever; and Summer Sisters. Her books have sold more than eighty-five million copies in thirty-two languages. She is a champion of intellectual freedom, working with the National Coalition Against Censorship in support of writers, teachers, librarians, and students. In 2004, Blume was awarded the National Book Foundation’s Medal for Distinguished Contribution to American Letters. She lives in Key West and New York City.

“In the Unlikely Event gives us everything that Blume is known (and beloved) for—the fierce, fraught nature of young relationships, the comfort and confines of cultural identity, the messiness and joys of the body—and takes it to a new level. This novel is her most ambitious to date, and she lives up to its reach with her characteristic frankness, compassion, and charm.” —Gayle Brandeis, The San Francisco Chronicle

“Judy Blume isn’t just revered, she’s revolutionary. . . . The novel moves with momentum, told in short chapter bursts, newspaper reports and even scripted dialogue. . . . Blume nails every 1950s detail, from the refinished basements with wet bars and knotty-pine walls to Elizabeth Taylor haircuts and mentions of Bogart and Bacall. . . . Blume, whose fiction for adults has the same emotional immediacy as her books for children, makes us feel the pure shock and wonder of living.” —Caroline Leavitt, The New York Times Book Review

“An ambitious book that combines adult experience with the sweet familiarity of Blume’s writing for and about younger people. . . . The novel rivals Tolstoy or Ferrante in its number of characters, families, and stories, and it feels not just believable but like a regular preteen-style Judy Blume page-turner, emotionally resonant and down-to-earth at once. . . . It’s also the experience of being in Blume’s authoritative hands, reading a dramatic story about daily life told in a funny, orderly, honest style. Blume is always kind to her readers; the suffering her characters experience feels real but never cruel, never melodramatic. . .  . [Her books are] deftly crafted, and she’s done the hard work for us. . . . Reading In the Unlikely Event is like reconnecting with a long-lost friend.” —Sarah Larson, The New Yorker

“Judy Blume is back—and on her game! . . . A deftly written story that captures a town coping with loss and the sudden fame that horrible tragedy brings. You won’t want to turn the last page.” —Kim Hubbard,People Magazine

“Will appeal to loyal fans as well as new readers. . . . In Miri, Blume deftly exposes the inner life of a teenager girl during the 1950s—and not the sanitized version so often portrayed. In the Unlikely Event integrates Blume’s acclaimed observation of the teenage experience with intimate knowledge of an unusual series of events, making it a page-turner with cross-generational appeal.” —Meganne Fabrega, Minneapolis Star-Tribune

“[In the Unlikely Event] does not disappoint. . . . Blume’s great gift is [her] personal touch; her unflinching but reassuring voice—that of a no-nonsense big sister who gives it to you straight, then gives you a hug—characterizes her adult novels as distinctly as it does her YA output.” —Emily Simon, Buffalo News

“Satisfying, heartfelt. . . Delivers on the warm nostalgia that we remember from Blume’s earlier books. . . It is her signature unparalleled ability to capture the innermost lives of teenagers that makes In the Unlikely Event vintage Judy Blume.” —Melissa M. Firman, Pittsburgh Post-Gazette

“The details of the time and place ring true, and so do the feelings of the characters.” —Margaret Quamme, The Columbus Dispatch

“Excellent and satisfying. . . Has all the elements of Blume’s best books: the complex relationships between friends and family members, the straight talk and lack of shame about sex, and, most of all, the compassionate insight into the pleasures and pains of growing up.” —Aimee Levitt, Chicago Reader

“Vividly rendered. . .  Blume deftly demonstrates just how different the personal fallout from tragedy can turn out to be. . . . As Blume proves over and over again not just in In the Unlikely Event but in all of her fiction, life does go on in spite of hardship. We love. We lose. We fail. We may fall. But the lucky ones, we try our best to endure.” —Alexis Burling,The Oregonian

“Blume, in clear and forthright storytelling, creates realistic characters searching for happiness while dodging the obstacles placed in their way. She does it with a compassionate understanding of life’s setbacks and the power we all have to survive and move on.” —Carol Memmott,Chicago Tribune

“A heartfelt novel intended to be heartwarming. In that it fully succeeds.” —Sherryl Connelly, New York Daily News

“Has [Judy Blume’s] signature warm, personal touch.” —Megan O’Grady, Vogue.com
“Comfort reading at its most soothing, the turn of its pages like sitting down with a beloved, long-lost friend.” —Lucy Scholes, The Independent(U.K.)

“There is no surprise that [In the Unlikely Event] is smoothly written, and its story compelling. The setting—the early 1950s—is especially well realized. . . A new Blume novel will always be big news.” —Michael Cart, Booklist (starred review)

From the Hardcover edition.