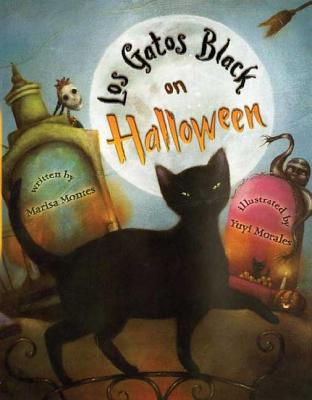 Follow los monstruos and los esqueletos to the Halloween party

Under October's luna, full and bright, the monsters are throwing a ball in the Haunted Hall. Las brujas come on their broomsticks. Los muertos rise from their coffins to join in the fun. Los esqueletos rattle their bones as they dance through the door. And the scariest creatures of all aren't even there yet!

This lively bilingual Halloween poem introduces young readers to a spooky array of Spanish words that will open their ojos to the chilling delights of the season.

Los Gatos Black on Halloween is a 2007 Bank Street - Best Children's Book of the Year, the winner of the 2008 Pura Belpre Medal for Illustration and a Pura Belpre Honor Book for Narrative.

Marisa Montes has written several books for young readers, including Juan Bobo Goes to Work, which won a Pura Belpré Honor. She lives in northern California.

Yuyi Morales is an author/illustrator whose books have won the Pura Belpré Award, the Christopher Award, and the Jane Addams Award. She lives in northern California. Her books include Just In Case, Viva Frida, and Little Night/Nochecita.

“Just right for children who are beginning to find typical Halloween fare a bit too tame.” —School Library Journal

“This spookiness is what Halloween is all about.” —Booklist

“A spooky seasonal treat and a great choice for any collection.” —Kirkus Reviews