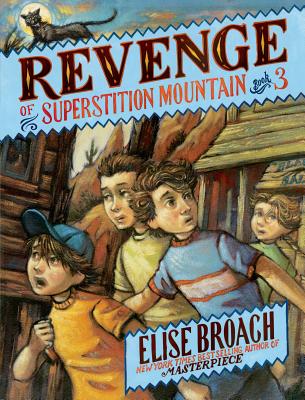 By Elise Broach, Aleksey &amp; Olga Ivanov (Illustrator)
$18.69
Not Available to Order- Possibly Out of Print

This is book number 3 in the Superstition Mountain Mysteries series.

In the third and final book in this action-packed trilogy, the Barker brothers and their good friend Delilah secretly climb up to Superstition Mountain one last time. There are still mysteries to solve—is the creepy librarian really the ghost of Julia Thomas from a century before? What was their uncle Hank's role in discovering the gold mine? Can they still get into the gold mine after the avalanche that nearly crushed them? Does their cat, Josie, have mysterious powers? And, most of all, who is trying to kill them?

Elise Broach is the New York Times bestselling author of Masterpiece, Shakespeare’s Secret and Desert Crossing, Missing on Superstition Mountain, the first book in the Superstition Mountain Trilogy, as well as several picture books. Her books have been selected as ALA notable books, Junior Library Guild selections, a Publishers Weekly Best Children’s Book, a New York Public Library Best Book for the Teenage, an IRA Teacher’s Choice, an E.B. White Read Aloud Award, and nominated for an Edgar Award, among other distinctions. Ms. Broach holds undergraduate and graduate degrees in history from Yale University. She was born in Georgia and lives in the woods of rural Connecticut, walking distance from three farms, a library, a post office and two country stores.

“* Broach builds on the daring escapades and eerie tension . . . in this stellar sequel. Readers will be eager for the next installment.” —Publishers Weekly, starred review on Treasure on Superstition Mountain

“[An] engrossing mystery. . . . Broach reserves plenty of suspicious characters, spooky landscapes and loose ends for the slated sequels, which both boys and girls will savor.” —Kirkus Reviews on Missing on Superstition Mountain

“A spine-tingling adventure. . . . This first book in a planned mystery series is the perfect antidote to those summer doldrums.” —Shelf Awareness on Missing on Superstition Mountain