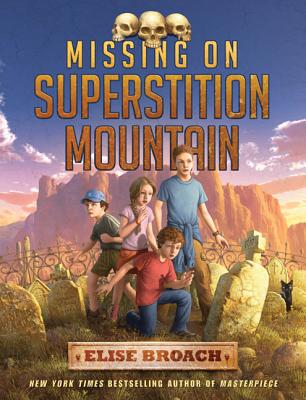 This is book number 1 in the Superstition Mountain Mysteries series.

It's summer and the three Barker brothers—Simon, Henry, and Jack—just moved from Illinois to Arizona. Their parents have warned them repeatedly not to explore Superstition Mountain, which is near their home. But when their cat Josie goes missing, they see no other choice. There's something unusually creepy about the mountain and after the boys find three human skulls, they grow determined to uncover the mystery. Have people really gone missing over the years, and could there be someone or some thing lurking in the woods? Together with their new neighbor Delilah, the Barker boys are dead-set on cracking the case even if it means putting themselves in harm's way.

Missing on Superstition Mountain is a Publishers Weekly Best Children's Fiction title for 2011.

“In this novel for children ages 8-12 she [Elise Broach] purposely leaves storylines dangling, the better perhaps to lure us back for sequels that will (we hope!) disclose what has gone missing on Superstition Mountain.” —The Wall Street Journal

“A spine-tingling adventure unfolds over the course of swift-moving short chapters, enhanced by Caparo's engaging black-and-white illustrations throughout.” —Shelf Awareness

“Children will be pleased by the mountain climbing and clue-finding aspects.” —School Library Journal

“With the unusual setting, the lure of mystery and adventure, and a certain innocence reminiscent of the Boxcar Children series, this story should find a ready audience.
” —Booklist

Written in the Stars: A Novel (Paperback)

Written in the Stars made me immensely, outlandishly happy. I was smiling the entire time I was reading this book. This romance brings together Elle, a heart-on-her-sleeve astrologer who is very simply looking for her soulmate, and Darcy, a by-the-book business woman who is very simply NOT. Elle and Darcy decide to fake a romance to appease their nagging families, but an oh-so-real romance ensues. This book plays fabulously on our favorite romantic tropes like fake dating and enemies-to-lovers, with nods to our beloved Pride & Prejudice. It is rich in its charm and humor, its vibrant characters, and its emotional storytelling. One of my favorite books of the year, I can't get Elle and Darcy and their marvelous love story out of my head.