The Crooked Mirror: A Memoir of Polish-Jewish Reconciliation (Hardcover) 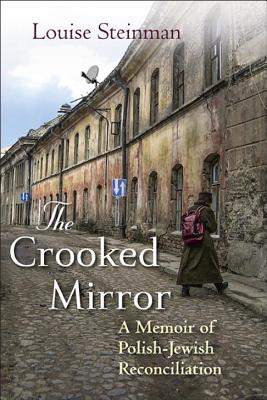 By Louise Steinman
$29.65
Not Available - Possibly Out of Print

“I’d grown up with the phrase ‘Never forget’ imprinted on my psyche. Its corollary was more elusive. Was it possible to remember—at least to recall—a world that existed before the calamity?”

In the winter of 2000, Louise Steinman set out to attend an international Bearing Witness Retreat at Auschwitz-Birkenau at the invitation of her Zen rabbi, who felt the Poles had gotten a “bum rap.” A bum rap? Her own mother could not bear to utter the word “Poland,” a country, Steinman was taught, that allowed and perhaps abetted the genocide that decimated Europe’s Jewish population, including members of her own extended family.

As Steinman learns more about her lost ancestors, though, she finds that the history of Polish-Jewish relations is far more complex. Although German-occupied Poland was the site of horrific Jewish persecution, Poland was for centuries the epicenter of European Jewish life. After the war, Polish-Jewish relations soured. For Poles under Communism, it was taboo to examine or discuss the country’s Jewish past. Among Jews in the Diaspora, there was little acknowledgment of the Poles’ immense suffering during its dual occupation.

Steinman’s research leads her to her grandparents’ town of Radomsko, whose eighteen thousand Jews were deported or shot during the Nazi occupation. As she delves deeper into the town’s and her family’s history, Steinman discovers a prewar past where a lively community of Jews and Catholics lived shoulder to shoulder, where a Polish Catholic painted the blue ceiling of the Radomsko synagogue, and a Jewish tinsmith roofed the spires of the Catholic church. She also uncovers untold stories of Poles who rescued their Jewish neighbors in Radomsko and helps bring these heroes to the light of day.

Returning time and again to Poland over the course of a decade, Steinman finds Poles who are seeking the truth about the past, however painful, and creating their own rituals to teach their towns about the history of their lost Jewish neighbors. This lyrical memoir chronicles her immersion in the exhilarating, discomforting, sometimes surreal, and ultimately healing process of Polish-Jewish reconciliation.

Louise Steinman is the author of the award-winning memoir The Souvenir: A Daughter Discovers Her Father’s War and The Knowing Body: The Artist as Storyteller in Contemporary Performance. For the past two decades, she has curated the ALOUD literary and performance series for the Library Foundation of Los Angeles. She also codirects the Los Angeles Institute for the Humanities at the University of Southern California.

“Steinman’s elegiac book is a powerful reminder of how ideologies can become ‘crooked mirror[s]’ that distort reality and destroy lives, cultures and nations.” —Kirkus Reviews

“Readers can be grateful to Ms. Steinman for bearing witness to those seeds of understanding being planted in lands where so much blood flowed.” —The Wall Street Journal

“[Steinman] achieves something close to peace with those struggling intensely to understand and rectify Poland’s Jewish past.” —Foreign Affairs

“Louise Steinman's story is heroic in all the old senses of the word: a journey of a literal sort; a journey into the terrible past; and a journey into her own soul. Unblinking, scrupulous and enduring.” —Alexandra Fuller, author of Don’t Let’s Go to the Dogs Tonight

“An event like the Holocaust not only takes a toll of dead and traumatizes the survivors. It leaves its mark on later generations as well—the children and grandchildren of the families of victims, perpetrators, and bystanders. This is the territory Louise Steinman explores, with great feeling and with hope, in The Crooked Mirror.” —Adam Hochschild, author of To End All Wars

“Louise Steinman has written the most extraordinary travel book I have ever read—about a journey to nightmare, through unmarked mass graveyards and dark haunted Polish and Ukrainian streets. The miracle is that shattering light breaks repeatedly into this otherwise dark journey. Jews—religious and secular—will have many reasons to read this book.  As a Christian, I urge other Christians to read every page of The Crooked Mirror, to face evil again, and to better understand redemption.” —Richard Rodriguez, author of Darling: A Spiritual Autobiography

“The Crooked Mirror is both provocative and ultimately redemptive, a book that will appeal to a wide audience of readers who care about history, genealogy, and the possibility of peace between estranged peoples.” —Jonathan Kirsch, author of The Short, Strange Life of Herschel Grynszpan