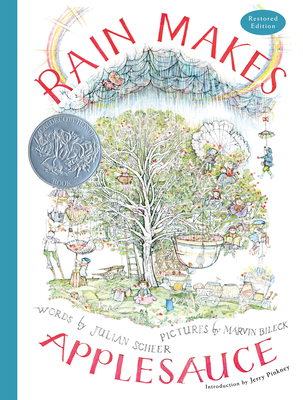 Featuring a new introduction by Caldecott Medalist Jerry Pinkney, this much-beloved classic has been carefully restored for a new generation.

One of TIME's 100 Best Children's Books of All Time!

So begins this award-winning collection of nonsense verse and images. A story-hour favorite since it was first published in 1964, this beloved read-aloud has been carefully remastered to bring back the rich, vivid details of its Caldecott Honor-winning artwork.

Featuring an introduction by Caldecott Medalist Jerry Pinkney, Rain Makes Applesauce is popular both as a bedtime story and as a go-to title for elementary teachers of creative writing.

Created by the unique team of legendary NASA publicist Julian Scheer and illustration master Marvin Bileck, this influential picture book has inspired artists and writers, as well as young children creating their own nonsense stories, for more than 50 years.

Julian Scheer (1926-2001) was a native Virginian and a graduate of the University of North Carolina. He began his career as a journalist, and later became an administrator for NASA's public affairs and a trustee for the Smithsonian Institution's National Air and Space Museum. After the lunar landing, Scheer was awarded NASA's highest recognition, the Distinguished Service Medal. He wrote two books for children and three books for adults.

Legendary author and illustrator Jerry Pinkney's many accolades include the Caldecott Medal, five Coretta Scott King Awards, five Coretta Scott King Honor Awards, four New York Times Best Illustrated Books, and four gold medals from the Society of Illustrators. He served on the National Council of the Arts, is a Trustee Emeritus of the Eric Carle Museum of Picture Book Art, and has taught at Pratt Institute, the University of Delaware, and the University of Buffalo. He lives in Westchester, New York.

Marvin Bileck (1920-2005) was born in New Jersey and graduated from Cooper Union before receiving a Fulbright Grant to study in France. His work has been exhibited in galleries and museums across the country, including the Metropolitan Museum of Art and the Chicago Institute of Art. He illustrated many books for children and received a Caldecott Honor for Rain Makes Applesauce.