Something Under the Bed Is Drooling: A Calvin and Hobbes Collection (Paperback) 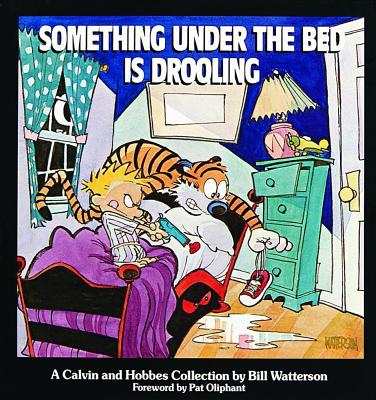 Something Under the Bed Is Drooling: A Calvin and Hobbes Collection (Paperback)

This is book number 3 in the Calvin and Hobbes series.

"Be good to yourself: Buy a copy of this Calvin and Hobbes cartoon book. If you don't laugh out loud at every third strip, check your pulse. You may be dead." —Phil Musick, Pittsburgh Press

Calvin is a rambunctious six-year-old whose manic antics threaten world peace. Hobbes is his stuffed tiger who comes alive when adults aren"t around. The saga of their daily exploits won cartoonist Bill Watterson the coveted Reuben Award for "Outstanding Cartoonist of the Year." Something Under the Bed Is Drooling is a jewel.
Bill Watterson is the creator of Calvin and Hobbes, one of the most popular and well-regarded cartoon strips of the twentieth century. Calvin and Hobbes appeared in newspapers from November 1985 until Watterson's retirement in 1995.