Rescuing JFK: How Solomon Islanders Rescued John F. Kennedy and the Crew of the PT-109 (Paperback) 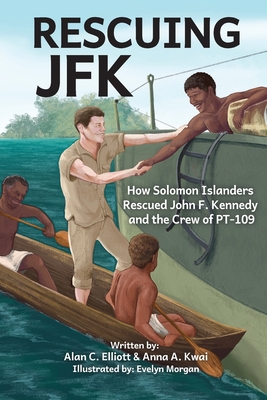 Rescuing JFK: How Solomon Islanders Rescued John F. Kennedy and the Crew of the PT-109 (Paperback)

Rescuing JFK is the story of the PT-109's dramatic rescue in World War II - told from the perspective of the Solomon Islands Scouts who saved the crew. In this story, future president John F. Kennedy's boat (PT-109) is rammed by a Japanese destroyer and sunk during World War II. Two young Solomon Islanders, Scouts for the Australian Royal Navy's Coastwatchers (Aaron Kumana and Biuku Gasa) rescue the crew in a daring adventure that shaped Kennedy's (and America's) future. This story showcases the bravery and determination of the Solomon Islands Scouts and the grit, resilience, and courage of John F. Kennedy and his crew. The primary material for the story comes from oral histories by the Solomon Islander rescuers who were instrumental in locating JFK and the PT-109 crew, plus information from their families and acquaintances. Historian and co-author Annie Kwai brings a fresh and culturally accurate perspective to this book. Her passion for Pacific History and lecturing on the history of the Solomon Islands and Papua New Guinea makes her uniquely qualified to tell this story. In addition, Alan's experience in having over 20+ books published, including several narrative histories and biographies, helps bring the story to life.