The Paths Between The Stars (Many Skies #1) (Hardcover) 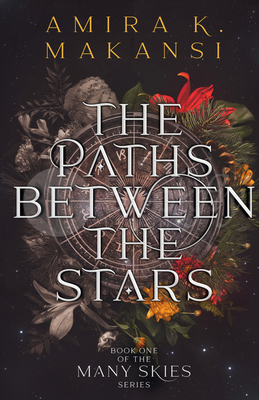 The Paths Between The Stars (Many Skies #1) (Hardcover)


Coming Soon - Available for Pre-Order Now
For fans of Philip Pullman, Neil Gaiman, and Laini Taylor comes a young adult science fiction-fantasy novel that will lead you into uncharted territory and undiscovered worlds.

For seven years, Noomi Perez has been living a nightmare: without warning, her vision will go dark, her mind empty, her body numb. She calls these episodes “shadows” and knows they are trying to hurt her, but no one believes her. They think the shadows are all in her head. After years of therapy, countless drug regimens, and a rotating cast of mental health specialists, Noomi knows that nothing can stop the shadows from finding her.

But when a boy with iridescent eyes pulls her back from the edge during an attack of the shadows, Noomi realizes he knows something about the creatures that haunt and hunt her.

As the shadows grow stronger and threaten to swallow her whole, Noomi must find a new way forward. The path she charts will open her eyes to worlds she never could have imagined - and put her in more danger than she could have believed.

In the tradition of Philip Pullman's His Dark Materials and Neil Gaiman's The Ocean at the End of the Lane comes the story one girl's battle to defeat the demons that haunt and hunt her. Weaving equal parts fantasy, psychology, and science fiction, The Paths Between The Stars blurs the lines between what is real and what is imagined on a journey into uncharted territory and undiscovered worlds.

Content warning: This book addresses sensitive topics such as mental illness and suicide.

Praise for Amira K. Makansi
"The writing is top-notch...[She has an] uncanny knack for getting inside the minds of her characters." - Peter Samet, Amazon Reviewer, for The Prelude

" Amira has pulled off something extraordinary here..." - Daryl Rothman, Amazon Reviewer, for The Prelude

"Insightful and written with great beauty and authority..." - Bernard Pilon, Amazon Reviewer, for The Prelude

"A thoughtful picaresque . . . Makansi's approach is fearless, fun, and, at times, autobiographical." - Oregon Wine Press, for Literary Libations
Amira K. Makansi is a co-author of the Seeds trilogy (The Sowing, The Reaping, and The Harvest) along with her mother Kristina and sister Elena Makansi, and she is the author of Literary Libations: What to Drink with What You Read. When not writing, she can be found running, hiking, camping, skiing, rafting through the wilds of her adopted home of Oregon.