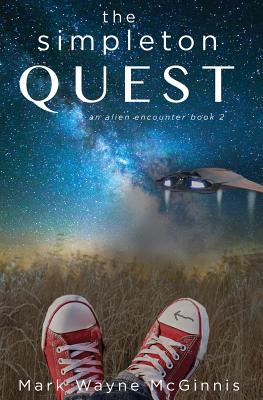 
Available to Order from Our Warehouse
This book cannot be returned
The Simpleton QuestIn book two of The Simpleton trilogy, the story of Cuddy Perkins continues. He's no longer the same mocked, often tormented, Woodbury, Tennessee village idiot. In fact, he's quite brilliant, trading his simple, country town existence for a life spent amongst the stars-voyaging on the spacecraft Evermore. Cuddy's life mission? Help an alien race, called the Pashier, and the being called Tow---the alien who'd changed his life so dramatically only weeks before. Supported by his brother, Kyle-also Tony and Brian, and his childhood best friend, Jackie-the team of five must find a way to combat the vicious Howsh before Primara is annihilated. Undertaking one last-ditch mission, the team must uncover certain hidden truths concerning both the Pashier and the Howsh-two races far more connected than previously known. The answers they seek can only be found in the distant past-in the ancient vaults of Calirah. To venture there, they will go up against vile savage beasts, treachery, and a fleet of alien warships that might be unstoppable. Not everyone in the group will survive. Emotionally and physically spent, en route to their next Interstellar destination, someone new will need their help-someone both vulnerable and powerful. Reviews: Love MWM's Books
I love all of Mark's books... Scrapyard Ship, Star Watch, Ship Wrecked, Gun Ship, Guardian Ship, Boy Gone, and his latest, The USS Hamilton series. With the Simpleton and The Simpleton Quest, Mark has taken a slight detour from space battles, and pure hard military science fiction with navy seals and hardcore aliens. In these Simpleton books, Mark shows a more tender side. The books are still full of conflict and tension and entertainment. I loved these books as much as his previous ones. It takes a talented author to write a broad spectrum of situations in closely related genres.- KP The Simpleton Quest / Sequel to The Simpleton by Mark Wayne McGinnis / Aliens good and bad...
In The Simpleton and The Simpleton Quest, Mark Wayne McGinnis continues his parade of quirky characters, clever storylines, and non-stop action that he first demonstrated in The Scrapyard Ship series. In the Simpleton series (the third book pending?) we have a new band of misfit humans, aliens good and bad, sentient robots, and advanced technology expertly woven into a compelling story that every sci-fi fan will enjoy. Mr. McGinnis books are just plain fun to read. If you liked any of his prior novels, you will love this one.- Chuck S Mark knock another one out of this world a great read.
Mark, you did it again hooked on this series, love the crew on this voyage to save two race's though at war with one another find out they need one another to survive.- Sailmike New to me
Somehow I missed the first book in this series but I was able to understand what had gone on in the past Mark did a good job updating us. Since I read and forget so much I likely would have needed it anyway A nice quick read on a par with his other work and I look forward to hearing more from these characters.- Trudi Great writing, great story..
I was so glad to see this storyline continue..and to see the characters develop.. Great writing, great story..-
Bob Wilson A fun and entertaining sci-fi space opera with interesting aliens.
The author is brilliant. His characters, young adult to adult are multi-=dimensional and the aliens are cool and interesting. There is conflict like the Scrapyard Ship box set books, but it's not about lots of space battles, and hard-core science fiction technology, it's simple and effective. The characters kept me interested in the story.- SH.