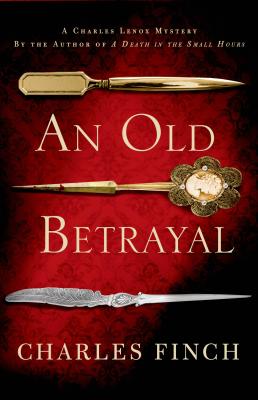 In An Old Betrayal, the seventh book of Charles Finch's bestselling series of Victorian mysteries, a case of mistaken identity has Charles Lenox playing for his highest stakes yet: the safety of Queen Victoria herself.

On a spring morning in London, 1875, Charles Lenox agrees to take time away from his busy schedule as a Member of Parliament to meet an old protege's client at Charing Cross. But when their cryptic encounter seems to lead, days later, to the murder of an innocuous country squire, this fast favor draws Lenox inexorably back into his old profession.

Soon he realizes that, far from concluding the murderer's business, this body is only the first step in a cruel plan, many years in the plotting. Where will he strike next? The answer, Lenox learns with slowly dawning horror, may be at the very heart of England's monarchy.

Ranging from the slums of London to the city's corridors of power, the newest Charles Lenox novel bears all of this series' customary wit, charm, and trickery a compulsive escape to a different time.

Charles Finch is a graduate of Yale and Oxford. He is the author of the Charles Lenox mysteries, including The Fleet Street Murders, The September Society and A Stranger in Mayfair. His first novel, A Beautiful Blue Death, was nominated for an Agatha Award and was named one of Library Journal's Best Books of 2007, one of only five mystery novels on the list. He lives in New York City.

"[A] superior series. . . . With the compassion and cynicism of Anthony Trollope, the sharply drawn heroes and villains of Charles Dickens and his own deft hand at sleight of plot, Finch has again blessed readers with a strong historical mystery, brimming with character and period, and the perfect puzzle with which to while away a winter’s evening." —Richmond Times-Dispatch

“Superb . . . Boasting one of Finch’s tightest and trickiest plots, this installment further establishes Lenox as a worthy heir to the aristocratic mantle of Lord Peter Wimsey.”
—Publishers Weekly (starred) on A Death in the Small Hours

“The sixth in Finch’s steadily improving series develops the congenial continuing characters further while providing quite a decent mystery.”
—Kirkus Reviews on A Death in the Small Hours