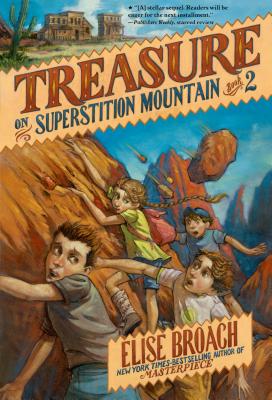 By Elise Broach, Antonio Javier Caparo (Illustrator)
$13.19
Not Available to Order- Possibly Out of Print

This is book number 2 in the Superstition Mountain Mysteries series.

Even though Henry Barker and his two brothers learned firsthand that the urban legend about danger on nearby Superstition Mountain wasn't just a myth, this doesn't stop them from planning their return. Along with their friend Delilah, the Barker brothers soon find themselves entangled in more danger and mystery as they uncover a real treasure, but the discovery comes at a very big price—they barely survive an avalanche. The question remains—is someone after them, or is the mountain seeking revenge?
Treasure on Superstition Mountain is the second book in Elise Broach's Superstition Mountain series.

“* [A] stellar sequel. Readers will be eager for the next installment.” —Publishers Weekly, starred review

“With the unusual setting, the lure of mystery and adventure, and a certain innocence reminiscent of the Boxcar Children series, this story should find a ready audience.” —Booklist on Missing on Superstition Mountain

“Broach reserves plenty of suspicious characters, spooky landscapes and loose ends for the slated sequels, which both boys and girls will savor.” —Kirkus Reviews on Missing on Superstition Mountain