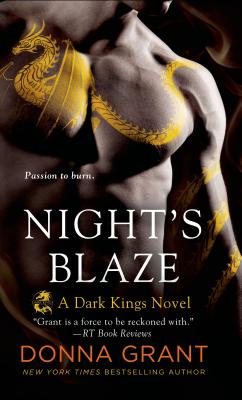 This is book number 5 in the Dark Kings series.

That one simple kiss slayed him as nothing in his very, very long life had ever done. It physically hurt him to release her and turn his back on everything she offered, but it was for the best.

A KING WHO WALKS IN DARKNESS

The Rhys who has existed for centuries is gone. Stripped of his ability to shapeshift, Rhys can no longer embody the majestic, powerful dragon he was at birth. Cut off from his heritage by one of his own, this Dragon King must remain a man, haunted by demons who torment his every waking moment. The darkness would swallow him whole...except a woman so beautiful and haunted becomes the one beam of light in his world...

A DESIRE THAT WILL NOT BE DENIED


Lily Ross is taking the first step in building a new life for herself. Still reeling from a relationship that nearly broke her spirit, Lily is wary of her attraction to brawny, brooding Rhys. The passion burning so brightly between them is a potent temptation, but any entanglement is destined to end in disaster. Yet when a spectre from Lily's past threatens their growing bond, Rhys is forced to choose with his heart, or lose this woman who has become his one chance at salvation...in Donna Grant's newest Dark Kings novel, Night's Blaze.

New York Times and USA Today bestselling author Donna Grant has been praised for her “totally addictive” and “unique and sensual” stories. She’s written more than thirty novels spanning multiple genres of romance including the bestselling Dark King stories, Dark Craving, Night’s Awakening, and Dawn’s Desire. Her acclaimed series, Dark Warriors, feature a thrilling combination of Druids, primeval gods, and immortal Highlanders who are dark, dangerous, and irresistible. She lives with her two children, a dog, and four cats in Texas.

"Dark, sexy, magical. When I want to indulge in a sizzling fantasy adventure, I read Donna Grant."