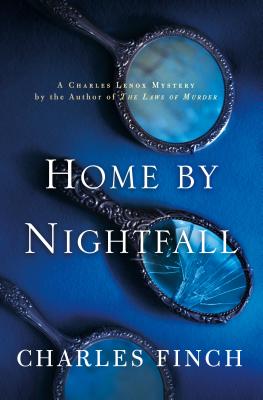 This is book number 9 in the Charles Lenox Mysteries series.

It's London in 1876, and the whole city is abuzz with the enigmatic disappearance of a famous foreign pianist. Lenox has an eye on the matter – as a partner in a now-thriving detective agency, he's a natural choice to investigate. Just when he's tempted to turn his focus to it entirely, however, his grieving brother asks him to come down to Sussex, and Lenox leaves the metropolis behind for the quieter country life of his boyhood. Or so he thinks. In fact, something strange is afoot in Markethouse: small thefts, books, blankets, animals, and more alarmingly a break-in at the house of a local insurance agent. As he and his brother to investigate this small accumulation of mysteries, Lenox realizes that something very strange and serious indeed may be happening, more than just local mischief. Soon, he's racing to solve two cases at once, one in London and one in the country, before either turns deadly. Blending Charles Finch's trademark wit, elegance, and depth of research, this new mystery, equal parts Jane Austen and Charles Dickens, may be the finest in the series.

Charles Finch is the USA Today bestselling author of the Charles Lenox mysteries, which begin with A Beautiful Blue Death. His first contemporary novel, The Last Enchantments, is also available from St. Martin's Press.

Finch received the 2017 Nona Balakian Citation Award, for excellence in reviewing from the National Book Critics Circle. His essays and criticism have appeared in the New York Times, Slate, Washington Post, and elsewhere. He lives in Los Angeles.

"A sterling addition to this well-polished series.... Odd, mysterious thefts [provide] a chance for Finch to dazzle us with his amusing studies of country folk and his offbeat approach to historic particulars." —The New York Times Book Review

“Charles Lenox [is] the gentleman sleuth in this beguiling series…. Finch's descriptions of life at sea are so fascinating it's a shame Lenox must bring this case to an end.” —Marilyn Stasio, New York Times Book Review

“The murder mystery that Finch weaves keeps readers guessing as Lenox must figure out how--and why--the killings are accomplished. . . . an intriguing read on several levels.” —Mary Foster, The Associated Press

“Much of the fun comes from watching Finch channel Patrick O'Brian (Master and Commander) as his landlubber hero finds his sea legs. You'll feel the spray in your face and worry, like the lovely Lady Jane back in England, that Lenox makes it safely home for book six--and the arrival of a new member of the family.” —McClurg, USA Today