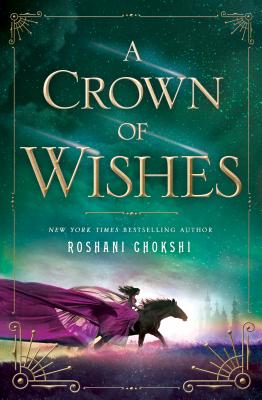 By Roshani Chokshi
$18.99
NOT AVAILABLE

This is book number 2 in the Star-Touched series.

From the author of The Star-Touched Queen comes a beautiful lush fantasy, Roshani Chokshi's A Crown of Wishes.

Gauri, the princess of Bharata, has been taken as a prisoner of war by her kingdom’s enemies. Faced with a future of exile and scorn, Gauri has nothing left to lose. Hope unexpectedly comes in the form of Vikram, the cunning prince of a neighboring land and her sworn enemy kingdom. Unsatisfied with becoming a mere puppet king, Vikram offers Gauri a chance to win back her kingdom in exchange for her battle prowess. Together, they’ll have to set aside their differences and team up to win the Tournament of Wishes – a competition held in a mythical city where the Lord of Wealth promises a wish to the victor.

Reaching the tournament is just the beginning. Once they arrive, danger takes on new shapes: poisonous courtesans and mischievous story birds, a feast of fears and twisted fairy revels.

Every which way they turn new trials will test their wit and strength. But what Gauri and Vikram will soon discover is that there’s nothing more dangerous than what they most desire.

Roshani Chokshi is the author of commercial and critically acclaimed books for middle grade and young adult readers that draw on world mythology and folklore. Her work has been nominated for the Locus and Nebula awards, and has frequently appeared on Best of The Year lists from Barnes and Noble, Forbes, Buzzfeed and more. Her New York Times bestselling series include The Star-Touched Queen duology, The Gilded Wolves, and Aru Shah and The End of Time, which has been optioned for film by Paramount Pictures.

Praise for A Crown of Wishes:

Named “One of the Most Anticipated YA Novels of 2017” by Entertainment Weekly, Teen Vogue, and Bustle.com

"Chokshi's debut, The Star-Touched Queen (2016), was lush and gorgeously written, and Chokshi has only improved; this lovely companion tale boasts a stronger narrative structure in addition to the delightful prose."—Booklist

"With a happily-ever-after reminiscent of beloved fairy tales, this is a great pick for voracious readers who like their bejeweled princesses to have hard edges."—Kirkus Reviews

"Chokshi revives the luscious and strange setting of Alaka from The Star-Touched Queen pulling in further elements of Indian folklore for creatures both charming and terrifying."—The Bulletin of the Center for Children's Books

Praise for The Star-Touched Queen:

"In Chokshi's prose, voices have substance and texture while light has color and flavor."—NPR.org

END_OF_DOCUMENT_TOKEN_TO_BE_REPLACED

This feature require that you enable JavaScript in your browser.
END_OF_DOCUMENT_TOKEN_TO_BE_REPLACED

This feature require that you enable JavaScript in your browser.
END_OF_DOCUMENT_TOKEN_TO_BE_REPLACED

This feature require that you enable JavaScript in your browser.
END_OF_DOCUMENT_TOKEN_TO_BE_REPLACED