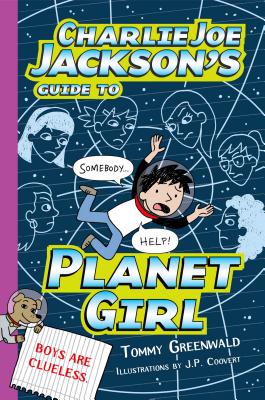 This is book number 5 in the Charlie Joe Jackson Series series.

Look out for make-ups, break-ups, and hilarious romance tips in this illustrated middle-grade novel, as Charlie Joe figures out this crazy little thing called love.

There's a crisis at Eastport Middle School! It appears that everyone has a boyfriend or girlfriend except . . . Charlie Joe Jackson??!? Yup—he's the only single guy out of all his friends. How is this possible? Even Pete Milano snagged a girl! Well, Charlie Joe refuses to be left out. He quickly goes looking for help in the last place anyone would think to find him—the library. And what he finds is the gem of all gems, the guidebook of all guidebooks, the key to finally getting a girl! Now, everyone is suddenly coming to him for love advice. (Oh, how the tables have turned.) But Charlie Joe's world is swiftly turned upside down when he realizes the girl he actually likes... might not actually be the girl he likes.

Tommy Greenwald has enjoyed reading all his life, which is why he's appalled that his kids Charlie, Joe and Jack, would prefer getting a dental check-up to checking out a book. After years of pleading, threatening, and bribing, Tommy finally decided the only way to get his kids to read was to write a book about how to get out of reading. The result was Charlie Joe Jackson's Guide to Not Reading. And they read it! (So they say.) The Executive Creative Director at SPOTCO, an entertainment advertising agency in New York City, Tommy lives in Connecticut with his wife, Cathy; his non-reading sons, Charlie, Joe and Jack; and his dogs, Moose and Coco.

JP Coovert lives in Cincinnati, Ohio where he uses his time making as much rad artwork as possible. On the side, he co-runs a record and comic label called One Percent Press. He's written and drawn almost 50 comics, including his ongoing series, Simple Routines. JP Wants to create cool stuff forever, like illustrating every animal on the planet, creating a library full of kids books, and painting a mural on the moon!

"A perfect book for the non-reader or reluctant reader in your life . . . Laugh-out-loud funny, clever, and relevant, I believe Tommy Greenwald has written a book that will appeal to kids of all reading tastes." —ReadKiddoRead.com

"This is a fun, fast-moving look at middle-school life through the eyes of a kid who would rather clean his room than pick up a book. Reluctant readers will be pleased." —School Library Journal

"A delightful choice for reluctant readers . . . If the book's cover showed something blowing up, every reluctant boy reader in middle school would be proud to carry it around while secretly enjoying the nonviolent, straightforward story. Bookworms won't care; they'll love it either way." —BookPage

"In author Tommy Greenwald's raucous debut...this comedy of comeuppance shows its true colors, and, irony of ironies, is impossible to put down!" —Disney's "Family Fun"

"No middle schooler wants to face a month at summer enrichment camp, but many will enjoy watching Charlie Joe work harder than he has ever worked before to avoid it . . . even if he fails." —Kirkus Reviews