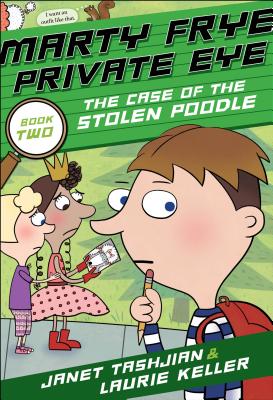 By Janet Tashjian, Laurie Keller (Illustrator)
$6.99
Recently On Our Shelves

This is book number 2 in the Marty Frye, Private Eye series.

In this new collection of mysteries from bestselling author-illustrator team Janet Tashjian and Laurie Keller, everyone’s favorite poet detective is back in action. When the school nurse’s equipment is stolen, Marty tracks it down. When special candy disappears from the store, Marty finds the culprit. And most importantly, when a friend's poodle goes missing, Marty comes to the rescue. But can he still manage to make up rhymes while he solves new crimes?

The poet detective continues to make up rhymes and solve new crimes, in this second book in the illustrated Marty Frye, Private Eye series for young readers.

The Adventures of Arnie the Doughnut:
Arnie, the Doughnut
Invasion of the Ufonuts
The Spinny Icky Showdown

Laurie Keller is the acclaimed author-illustrator of Do Unto Otters, Arnie, the Doughnut, The Scrambled States of America, and Open Wide: Tooth School Inside, among numerous others. She grew up in Muskegon, Michigan, and always loved to draw, paint and write stories. She earned a B.F.A. at Kendall College of Art and Design, then worked at Hallmark as a greeting card illustrator for seven-and-a-half years, until one night she got an idea for a children’s book. She quit her job, moved to New York City, and soon had published her first book. She loved living in New York, but she has now returned to her home state, where she lives in a little cottage in the woods on the shore of Lake Michigan.

"The cadence of Marty's rhyming dialogue is somewhat infectious, and has the added benefit of helping young readers tackle unfamiliar (but rhyming) words. . . . A fun and bouncy young kids' book, that's sure to appeal with its big kids' look." —Kirkus Reviews

A is for Activist (Board book)

“A is for Activist. Advocate. Abolitionist.  Ally. Actively Answering A call to Action. Are you an Activist?” Don’t you want to know what B stands for? This book is so awesome. It has great references that politically active parents will get a kick out of, as well as fun alliteration and bold, colorful illustrations. A go to baby shower present for me, this book is sure to raise a peace-loving, politically active baby army. Power to the babies! - Linnea