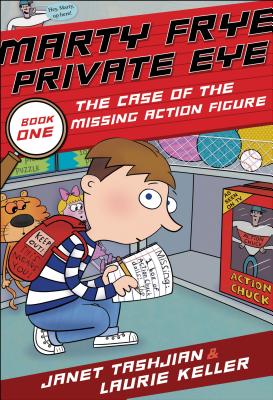 This is book number 1 in the Marty Frye, Private Eye series.

Broken into three short stories of poetry and petty crime, this charming chapter book will have young readers in search of a rhyme in no time. Book 1 in the Marty Frye series!

Marty Frye is not your ordinary sleuth. Marty Frye is a poet detective—he makes up rhymes as he solves small crimes. When his friend Emma's diary is missing, Marty is on the case. When Katie's flour is nowhere to be found, Marty tracks it down. And when the brand-new Action Chuck figures mysteriously vanish from the toy store, Marty unravels the mystery. Will there ever be a case too hard for Marty to solve? Or a word too impossible to rhyme?

A poet detective saves the day in this first book in the illustrated Marty Frye, Private Eye series.

The Adventures of Arnie the Doughnut:
Arnie, the Doughnut
Invasion of the Ufonuts
The Spinny Icky Showdown

Laurie Keller is the bestselling author-illustrator of many books for kids, including Do Unto Otters; Potato Pants!; The Scrambled States of America; the Geisel Award-winning We Are Growing!; and Arnie the Doughnut, as well as three books in the Adventures of Arnie the Doughnut chapter book series.

Growing up in Michigan, Laurie always loved to draw, paint and write stories. She earned a B.F.A. at Kendall College of Art and Design, then worked at Hallmark Cards in Kansas City as a greeting card illustrator for seven years. One night, the idea for a children’s book popped into her head and after showing the story to several publishers in New York City, she quit her job and moved there. The following year, that story idea was a published book—The Scrambled States of America. Laurie loved living in NYC, but she returned to her home state, where she lives in the woods along the shores of Lake Michigan.

"The cadence of Marty's rhyming dialogue is somewhat infectious, and has the added benefit of helping young readers tackle unfamiliar (but rhyming) words. . . . A fun and bouncy young kids' book, that's sure to appeal with its big kids' look." —Kirkus Reviews