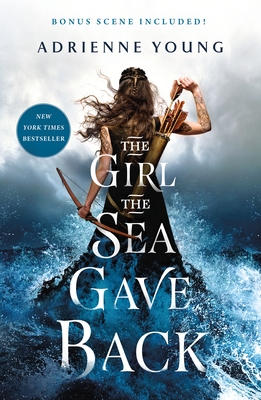 This is book number 2 in the Sky and Sea series.

“Feeding off the marvelous and vicious world established in Sky in the Deep, Adrienne Young has delivered another powerful and phenomenal book featuring amazing illustrations and personable characters. Inspired by the Vikings and Norse mythology, this is a story of coming together to fight for what you love, even against the odds. The characters are flawed and well-developed; the battles and fights are realistic and emotional. This book proves that old wounds can heal and enemies can put aside their differences. Young has a way with words —they are powerful, raw, and filled with emotion. You will not regret getting sucked back into the wonderful world from Sky in the Deep!”
— Anna Rose Carleton, The Well-Read Moose, Coeur d'Alene, ID

Author Adrienne Young has outdone herself with her sophomore book and "companion" to her thrilling Sky In The Deep. Although Tova, our protagonist is not a warrior, she displays remarkable strength and courage when faced with brutalities and violence. She is a Truthtongue, and has arrived-feared, loathed and condemned- as a child at a competing and very inhospitable klan. She uses the harsh realities of nature to her advantage and cast runes that go against the klan that is housing her. War is in the future and she is drawn to a strange young warrior from a competing klan, whom she does not understand. Sparks fly, along with arrows, axes and swords, in this not to be missed tale brimming with Viking-esque lore.

From Adrienne Young, New York Times bestselling author of Sky in the Deep, comes her new gut-wrenching epic The Girl the Sea Gave Back.

For as long as she can remember, Tova has lived among the Svell, the people who found her washed ashore as a child and use her for her gift as a Truthtongue. Her own home and clan are long-faded memories, but the sacred symbols and staves inked over every inch of her skin mark her as one who can cast the rune stones and see into the future. She has found a fragile place among those who fear her, but when two clans to the east bury their age-old blood feud and join together as one, her world is dangerously close to collapse.

For the first time in generations, the leaders of the Svell are divided. Should they maintain peace or go to war with the allied clans to protect their newfound power? And when their chieftain looks to Tova to cast the stones, she sets into motion a series of events that will not only change the landscape of the mainland forever but will give her something she believed she could never have again—a home.

Adrienne Young is a foodie with a deep love of history and travel and a shameless addiction to coffee. When she’s not writing, you can find her on her yoga mat, sipping wine over long dinners or disappearing into her favorite art museums. She lives with her documentary filmmaker husband and their four little wildlings in the Blue Ridge Mountains of North Carolina. She is the author of the New York Times bestselling Sky in the Deep duology and the Fable duology.

"A fast-paced and fierce atmospheric story with a heavy dose of fate and a light touch of romance." - Young Adult Book Central

"Gripping and exquisitely written. The Girl the Sea Gave Back tore at my heart strings until I was completely unraveled. Readers will fall in love with this story, whether they are fans of Sky in the Deep or new to Adrienne Young's breathtaking world." - Stephanie Garber, New York Times bestselling author of Caraval

"Eerie and beautiful, The Girl the Sea Gave Back is set in a world so vivid, you can almost touch it. I devoured this story of a lonely, powerful young woman with the ability to change the fate of her world, and the brave young chieftain who must stop her at all costs." - Kristen Ciccarelli, bestselling author of The Last Namsara

"Ignore this omen at your own peril--you will love this book! Perfect for fans of The Last Kingdom, it really immersed me in the Viking world that felt so mystical, complex, and fully formed. From the moment we first meet them, Tova and Halvard unravel the complicated threads of family, fate, and destiny." - A. C. Gaughen, author of Reign the Earth