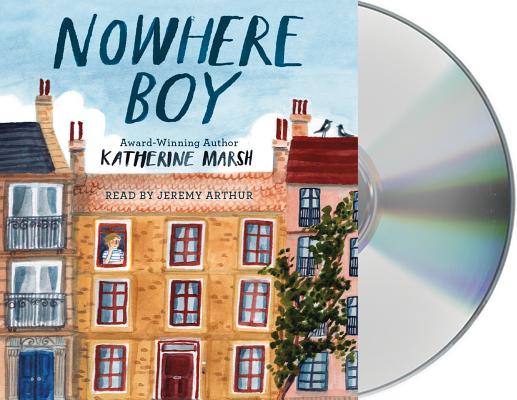 By Katherine Marsh, Jeremy Arthur (Read by)
$43.99
NOT AVAILABLE

An "important and riveting story, masterfully told" of family, sacrifice and the friendship between a young Syrian refugee and an American boy living in Brussels. The Center for Children's Books calls Nowhere Boy a "perilous journey, tempered by the striking realism of obstacles refugees face daily."

Fourteen-year-old Ahmed is stuck in a city that wants nothing to do with him. Newly arrived in Brussels, Belgium, Ahmed fled a life of uncertainty and suffering in Aleppo, Syria, only to lose his father on the perilous journey to the shores of Europe. Now Ahmed’s struggling to get by on his own, but with no one left to trust and nowhere to go, he’s starting to lose hope.

Then he meets Max, a thirteen-year-old American boy from Washington, D.C. Lonely and homesick, Max is struggling at his new school and just can’t seem to do anything right. But with one startling discovery, Max and Ahmed’s lives collide and a friendship begins to grow. Together, Max and Ahmed will defy the odds, learning from each other what it means to be brave and how hope can change your destiny.

Set against the backdrop of the Syrian refugee crisis, award-winning author of Jepp, Who Defied the Stars Katherine Marsh delivers a gripping, heartwarming story of resilience, friendship and everyday heroes. Barbara O'Connor, author of Wish and Wonderland, says "Move Nowhere Boy to the top of your to-be-read pile immediately."

Katherine Marsh is the Edgar Award-winning author of The Night Tourist; The Twilight Prisoner; Jepp, Who Defied the Stars; and The Doors by the Staircase. Katherine grew up in New York and now lives in Brussels, Belgium, with her husband and two children.

A "perilous journey, tempered by the striking realism of obstacles refugees face daily." - Bulletin of the Center for Children's Books, Starred Review

"This well-crafted and suspenseful novel touches on the topics of refugees and immigrant integration, terrorism, Islam, Islamophobia, and the Syrian war with sensitivity and grace. A captivating book situated in present-day discourse around the refugee crisis." - Kirkus, Starred Review

"Marsh skillfully weaves the historical parallels with a touching story of friendship. She ratchets up the tension and suspense, until it becomes unbearable; readers will fly through the last hundred pages...Thoughtfully touching on immigration, Islamophobia, and terrorism, this novel is a first-purchase. Hands to fans of Alan Gratz’s Refugee." - School Library Journal, Starred Review

"An important and riveting story, masterfully told. Move this one to the top of your to-be-read pile immediately." -Barbara O'Connor, author of WISH and WONDERLAND

"Nowhere Boy has the authenticity of nonfiction, with all the heart and pulse of a great novel. As a journalist, who has reported on the refugee crisis for years, I was deeply impressed by how real and gripping Marsh's tale felt -- from the very start -- as a father and son clung to life raft in rough seas. This should be required reading in middle schools across America." -- Jake Halpern, winner of the 2018 Pulitzer Prize for his series, "Welcome to the New World," in the New York Times.

"A hopeful story about recovery, empathy, and the bravery of young people." - Booklist

"Perfect for classroom reads, this timely novel with its strong male protagonists will foster discussions about friendship, Islam, and complex refugee predicaments throughout the world." - VOYA