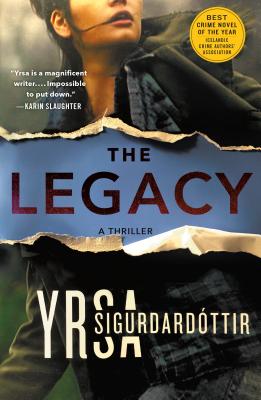 By Yrsa Sigurdardottir
$17.99
Recently On Our Shelves

The first in a stunning new series from Yrsa Sigurdardottir, the author of The Silence of the Sea, winner of the 2015 Petrona Award for best Scandinavian Crime Novel.

The Legacy is the first installment in a fantastic new Icelandic series featuring the psychologist Freyja and the police officer Huldar.

The only person who might have the answers to a baffling murder case is the victim’s seven-year-old daughter, found hiding in the room where her mother died. And she’s not talking.

Newly-promoted, out of his depth, detective Huldar turns to Freyja for her expertise with traumatized young people. Freyja, who distrusts the police in general and Huldar in particular, isn’t best pleased. But she’s determined to keep little Margret safe.

It may prove tricky. The killer is leaving them strange clues, but can they crack the code? And if they do, will they be next?

YRSA SIGURDARDÓTTIR (pronounced UR-suh SIG-ur-dar-daughter) lives with her family in Reykjavík; she is also a director of one of Iceland's largest engineering firms. Her work is found on bestseller lists all over the world, and films are currently in production for several of her books. Her titles include, The Day is Dark and Ashes to Dust.

Praise for The Legacy:

"[A] relentlessly paced series launch...Few readers will be able to put down this powerful tale of revenge."—Publishers Weekly (starred)

"This thriller will have Nordic noir fans turning the pages."—Library Journal

"This was a page turner...Definitely looking forward to another in this series, especially with Freya."—Book Riot

"Sigurdardottir expertly introduces the players, constructs the world and, most importantly, tells the first tale in her new Children's House series. Readers should sit back and enjoy their armchair visit to Reykjavik, Iceland, and a chillingly satisfying international thriller."—RT Book Reviews

"Yrsa is a magnificent writer who envelops her stories with atmosphere so thick that only care and a bit of luck can see through it. Her characters spring vividly to life as they try their best to do just that, knowing that any mistake could be deadly for another innocent person. Impossible to put down.”–Karin Slaughter

"Brilliant . . . her best novel to date"—The Globe and Mail on The Legacy

"The Legacy is the start of an exciting new direction for Yrsa Sigurdardottir. The horror of a decades-old family separation provides the catalyst for dark crimes and a complex investigation."—Sarah Ward, author of In Bitter Chill

"We have always been able to rely on Yrsa Sigurdardóttir for a good story well told, and DNA is no exception. A strong sense of place, interesting characters and a chilling plot make The Legacy a novel to savor."—Peter Robinson

"If you like your crime fiction dark and engaging, look no further. A cracking start to a new series by Yrsa Sigurdardottir."—Mari Hannah on The Legacy

"Yrsa remains the queen of Icelandic thriller writers."—Guardian on The Legacy

"I can see why so many people are enthusiastic about Yrsa's work. It's very engaging, fresh and exciting."—James Patterson