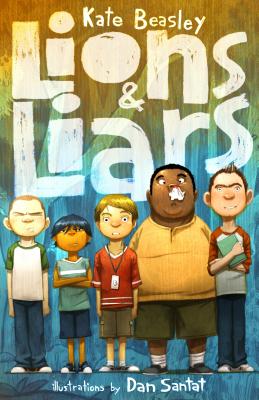 By Kate Beasley, Dan Santat (Illustrator)
$7.99
On Our Shelves Now

Holes meets The Goonies in the highly anticipated second middle-grade novel from the author of Gertie's Leap to Greatness!

Frederick Frederickson has a food-chain theory about life. There are lions, like the school bully. Gazelles, like the bullied kids. There are meerkats, and the fleas that live on the butts of meerkats. Frederick's a flea.

Fifth grade is off to a terrible start when Frederick is sent to a disciplinary camp for troublesome boys. His fellow troop mates—Nosebleed, Specs, The Professor, and little-yet-lethal Ant Bite—are terrifying. But in between trust-building exercises and midnight escape attempts, a tenuous friendship grows between them. Which is lucky, because a Category 5 hurricane is coming and everyone will have to work together—lions and fleas alike—to survive!

Kate Beasley outdoes herself in this hilarious, whip-smart tale of brotherhood, survival, and what it really means to be a friend.

"Beasley's sophomore novel. . .is chock full of zany, nicknamed characters (Frederick shares a cabin with Nosebleed, Ant Bite, Specs, and the Professor) coming together in a story of friendship among boys. . .A fun coming-of-age romp." —Kirkus Reviews

Kate Beasley holds a Masters in Writing for Children and Young Adults from the Vermont College of Fine Arts. She lives with her family in Claxton, Georgia, with two dogs, one parrot, lots of cows, and a cat named Edgar. Gertie's Leap to Greatness is her first novel.

Dan Santat is the Caldecott Medal–winning and New York Times–bestselling author and illustrator of The Adventures of Beekle: The Unimaginary Friend and the road trip/time travel adventure Are We There Yet? His artwork is also featured in numerous picture books, chapter books, and middle-grade novels, including Dav Pilkey's Ricky Ricotta series. Dan lives in Southern California with his wife, two kids, and many, many pets.

"Beasley (Gertie’s Leap to Greatness) writes with ease, engaging readers quickly with hapless but hopeful Frederick’s sincerity. His struggles with popularity and self-confidence make him a relatable, realistic protagonist readers would want for a friend. . .straightforward message about self-acceptance and true friendship will leave readers smiling. —School Library Journal

"Ms. Beasley does something admirable with her food-chain metaphor: A bit like Chekhov’s gun, the metaphorical lion from the first act turns into a real one at the end, adding a moment of unexpected bite. Otherwise tender at heart and laugh-out-loud entertaining, the tale of Frederick’s misadventures and Dan Santat’s exuberant illustrations will charm readers ages 8-12." —The Wall Street Journal

Fans of Percy Jackson will devour this hilarious adventure story of a brave gargoyle named Penhallow (Don't call him Goyle!) and his human friend Viola. Penhallow takes the protection of his Wards, the people living in the home he lives on, seriously and when a mysterious Boneless King starts releasing all the scary creatures that go bump in the night, it is his job to get to the bottom of the problem before it is too late. - Jessica