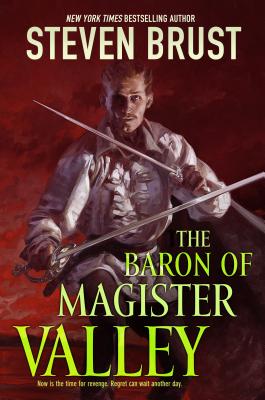 This is book number 2 in the Dragaera series.

Reader, you will undoubtedly have had the misfortune of consuming the rotten fruit of fallacies that we—Paarfi of Roundwood (esteemed historian of House of Hawk and exquisite artisan of truths)—“borrow” our factual recount of Dragaeran history from some obscure fellow who goes by the name Al Dumas or some silly nomenclature of that nature.

The salacious claims that The Baron of Magister Valley bears any resemblance to a certain nearly fictional narrative about an infamous count are unfounded (we do not dabble in tall tales. The occasional moderately stretched? Yes. But never tall).

Our tale is that of a nobleman who is betrayed by those he trusted, and subsequently imprisoned. After centuries of confinement, he contrives to escape and prepares to avenge himself against his betrayers.

A mirror image of The Count of Monte Cristo, vitrolic naysayers still grouse? Well, that is nearly and utterly false.

STEVEN BRUST is the author of a number of bestselling fantasy novels, including two New York Times bestsellers, Dzur and Tiassa. He lives in Minneapolis, Minnesota.

“Brust is one of those natural caper writers, a pulp writer in the Hammett tradition, someone with what William Gibson calls ‘wheels on his tractor’.... A writer who can spin a yarn that keeps you guessing until the end.” —Cory Doctorow on Hawk

“Wonderful…Like most of Brust’s books, this witty, wry tale stands alone and is very accessible to new readers.” —Publishers Weekly on Tiassa

"Watch Steven Brust. He's good. He moves fast. He surprises you. Watching him untangle the diverse threads of intrigue, honor, character and mayhem from amid the gears of a world as intricately constructed as a Swiss watch is a rare pleasure." —Roger Zelazny