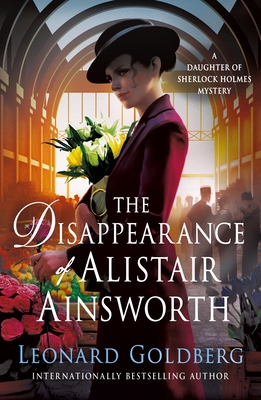 This is book number 3 in the The Daughter of Sherlock Holmes Mysteries series.

In the third book of this critically-acclaimed series, Sherlock Holmes' daughter faces a new unsolvable mystery with spies and a threat to the crown.

Joanna and the Watsons receive an unexpected visitor to 221b Baker Street during a nocturnal storm. A rain-drenched Dr. Alexander Verner arrives with a most harrowing tale.

Verner has just returned from an unsettling trip to see a patient who he believes is being held against his will. Joanna quickly realizes that Verner's patient is a high-ranking Englishman who the Germans have taken captive to pry vital information about England’s military strategies for the Great War. The man is revealed to be Alistair Ainsworth, a cryptographer involved in the highest level of national security.

The police are frantic to find Ainsworth before the Germans can use him to decode all of England’s undeciphered messages. Ainsworth must be found at all costs and Joanna and the Watsons might be the only ones who can connect the clues to find him.

USA Today bestselling author Leonard Goldberg returns with another puzzling case for the daughter of Sherlock Holmes to unravel in this exciting mystery sure to be enjoyed by fans of Sherlock Holmes, The Disappearance of Alistair Ainsworth.

Leonard Goldberg is the USA Today bestselling author of the Joanna Blalock medical thrillers. His novels have been translated into a dozen languages and were selections of the Book of the Month Club, French and Czech book clubs, and The Mystery Guild. They were featured as People’s “Page-Turner of the Week” and at the International Book Fair. After a long career affiliated with the UCLA Medical Center as a Clinical Professor of Medicine, he now lives on an island off the coast of Charleston, SC.

"Fans of all things Sherlock-ian will delight in Joanna, so like her father and already training her schoolboy son, Johnny, in the methods that have solved so many cases like this exceptionally tricky one." —Kirkus Reviews

"Fans of the original mysteries will get a chuckle out of the antic language, and there is a mercurial Mary Poppins appeal to this not-to-be-trifled-with heroine that will appeal to fans beyond Baker Street." —Booklist

"Suspenseful and entertaining, with many twists and turns....This is one of the best Sherlock Holmes series since Laurie R. King’s Mary Russell books." —Historical Novel Society

Praise for A Study in Treason:

"Goldberg matches the style of Conan Doyle's stories and adds the fillip of a female protagonist." —Kirkus Reviews

“Avid Sherlockians will be delighted with the many echoes of the original Holmes canon.” —Publishers Weekly

"There is plenty of pleasure to be found here for lovers of Holmes pastiches." —Booklist

"The plot is quick paced and is sprinkled with unforeseen clues that enhance the overall story. Leonard Goldberg is a great writer and brings to life the legend of Sherlock Holmes." —RT Book Reviews (4 stars)

"Fans of Sherlock Holmes are in for a treat with A Study in Treason: A Daughter of Sherlock Holmes Mystery by Leonard Goldberg. The mystery tests the mind and forensic skills of the private eye's heir in the new novel..." —National Examiner

"An extraordinarily entertaining mystery. This is a gift to the fans of Sherlock Holmes." —The Washington Book Review


Praise for The Daughter of Sherlock Holmes:

"Fans of Sherlock Holmes will be thrilled to meet his fearless and brilliant daughter, Joanna. Once again the game's afoot, and a new Holmes and Watson unite to solve the unsolvable in this delightful adventure by Leonard Goldberg." —Tess Gerritsen, New York Times bestselling author of I Know a Secret

"Cleverly crafted with fascinating characters and a plot that Conan Doyle would be proud of. Sherlock fans looking for a new series need look no further than Goldberg's well developed and fascinating tale!" —M.J. Rose, New York Times bestselling author

"Adventure, murder, family secrets and intrigue are abound in this novel, which has incredible characters who are charming, cunning and smart as a whip. Goldberg has successfully intertwined historical facts with fiction, and has created a must-read novel for fans of historical mystery and of Sherlock Holmes." —RT Book Reviews

"The Daughter of Sherlock Holmes is a nicely rendered tale that will appeal to Sherlockian readers of all shades. The language and settings are faithful to Arthur Conan Doyle's original stories. John Jr. acts as narrator rather than Dr. Watson, and Joanna is an alluring replacement for the great detective." —Mystery Scene

"This clever book will keep you on the edge of your seat with its many thrilling twists and turns. The plot is worthy of Conan Doyle’s originals, and I hope to see many more adventures of Joanna Blalock and John Watson, Jr." —Historical Novel Society

"Goldberg's Sherlock Holmes pastiche is pitch-perfect as John Watson Jr. becomes the voice of a new generation and Joanna Blalock takes on her role as leader of the investigation. Fans of Laurie R. King's "Mary Russell" books will welcome a fellow female to the ranks of Holmes followers." —Library Journal

"Goldberg, well-known for his medical thrillers, fuels the unquenchable fascination with Sherlock Holmes by combining detailed medical knowledge with the skills reincarnated in the Great Detective's daughter." —Kirkus Reviews

"Engaging... Joanna is Holmes' daughter, even down to echoing the great man's occasional lapses into smugness: 'Allow me to draw your attention....'" —Booklist

"A compelling murder mystery that's genuinely difficult to solve without the help of Mrs. Blalock and Dr. Watson." —Reviewing the Evidence blog

"Here's a charming cozy with a new and delightful spin on the Holmes and Watson partnership.... The game is afoot once more! I look forward to following this engaging series." —BookLoons blog

"The game is definitely afoot. Readers can follow along as they uncover clues, play with theories, and do their best to uncover the truth that will solve the case. There's danger, misdirection, surprises, a bit of romance, and characters that are interesting and believable." —Gumshoe Review

Gripping, pulse inducing in-the-near-future dystopian America, Giles has constructed the Funnest Place on Earth with different & terrifying meanings to classes of people providing comfort, service and trust “The Karloff Country” way. Teen characters ring true in their awkwardness, anxiety and camaraderie in a place that chillingly goes horrifically evil. Not to be missed for horror fans.