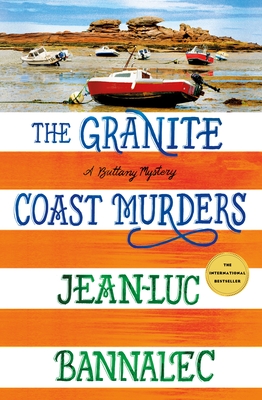 This is book number 6 in the Brittany Mystery Series series.

In the sixth installment of Jean-Luc Bannalec's bestselling mystery series, Commissaire Dupin returns to investigate a murder at a gorgeous Brittany beach resort.

Inspector Dupin and Claire are on a two-week vacation, but while Claire seems to enjoy the quiet of the beach, Commissaire Dupin takes every opportunity to leave the beach towel. The fabulous dinners on the hotel patio and the rumors about a stolen statue of a saint are the few interesting moments of his days on vacation. But then a tourist vanishes without trace and there’s an attack on a deputy to the local assembly, who is involved in confrontations with local farmers. Shortly after that, the Britanny beach resort is shocked by the discovery of a corpse.

Dupin clandestinely begins to investigate with the help of the local villagers, something he must keep a secret from Claire and his colleagues in Concarneau. Between bewitched valleys and beautiful beaches, an unfathomable case develops.

"The huge, variegated pink granite formations surrounding a beach resort in northern Brittany provide haunting atmosphere and a gripping climax to this sixth Brittany mystery starring Georges Dupin. The plot ticks along nicely, aided and abetted by Bannalec’s tantalizing descriptions of Dupin and Claire’s sightseeing and feasting. Bannalec’s mysteries are both well crafted and impossible to read without wanting to use them as guides for future trips to the region."--Booklist (starred review)

“Unsolved crimes and a restless policeman turn out to be excellent holiday companions in Brittany… Between the food, the scenery, and the felonies, what’s not to like?”--Kirkus Reviews (starred review)

"The descriptions of Brittany are mesmerizing. It has been elevated into my top 10 places I need to visit, all thanks to Bannalec.”--BookPage (starred review)

"Clever and amusing...a delightful novel that effortlessly transports readers to the astoundingly beautiful Pink Granite Coast. Perfect for fans of Louise Penny or Mark Pryor...not to be missed."--Shelf Awareness


Praise for the series:

How do you get your creative juices flowing? In this lovingly told, gorgeously illustrated picture book biography of beloved author Madeleine L’Engle, inspiration like singing stars in the night sky, will crawl inside your heart begging readers to ask big questions and always look for answers. Stunning!