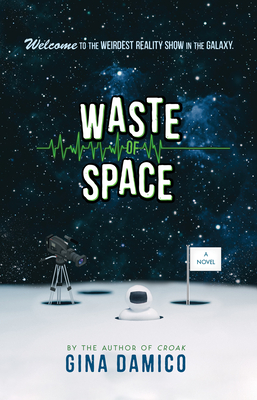 Out of Print
Cram ten hormonal teens into a spaceship and blast off: that’s the premise for the ill-conceived reality show Waste of Space. The kids who are cast know everything about drama—and nothing about the fact that the production is fake. Hidden in a desert warehouse, their spaceship replica is equipped with state-of-the-art special effects dreamed up by the scientists partnering with the shady cable network airing the show.
And it’s a hit! Millions of viewers are transfixed. But then, suddenly, all communication is severed. Trapped and paranoid, the kids must figure out what to do when this reality show loses its grip on reality. A suspenseful and satirical look at reality TV that will keep readers laughing and guessing until the last page.

Gina Damico is the author of Hellhole, Wax, and the grim-reapers-gone-wild books of the Croak trilogy. She has also dabbled as a tour guide, transcriptionist, theater house manager, scenic artist, movie extra, office troll, retail monkey, yarn hawker and breadmonger. A native of Syracuse, New York, she now lives in Los Angeles with her husband, two cats, one dog, and an obscene amount of weird things purchased from yard sales. Visit her website at www.ginadami.co.

"A sure pick for fans of sci-fi spoofs, black humor, and unusual formats." —Booklist

Damico does for media frenzy and outer space what Libba Bray did for glamour pageants in Beauty Queens, taking this adventure all the way from comedy to sharp satire."  —Bulletin

Damico nails the anything-for-hype mindset of reality TV, keeping the action whizzing along at a zany pace and the laugh lines humming." —Horn Book