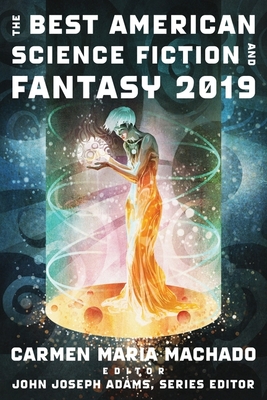 
Available to Order from Our Warehouse
This omnivorous selection of stories chosen by series editor John Joseph Adams and World Fantasy Award finalist Carmen Maria Machado is a display of the most boundary-pushing, genre-blurring, stylistically singular science fiction and fantasy stories published in the last year. By sending us to alternate universes and chronicling ordinary magic, introducing us to mythical beasts and talking animals, and engaging with a wide spectrum of emotion from tenderness to fear, each of these stories challenge the way we see our place in the cosmos. The Best American Science Fiction and Fantasy 2019 represents a wide range of the most accomplished voices working in science fiction and fantasy, in fiction, today—each story dazzles with ambition, striking prose, and the promise of the other and the unencountered.

JOHN JOSEPH ADAMS is the series editor of The Best American Science Fiction and Fantasy and is the editor of more than thirty anthologies, such as Wastelands, The Living Dead, and The Dystopia Triptych. He is also the editor the Hugo Award-winning Lightspeed, and is also publisher of Lightspeed as well as its sister-magazines Nightmare and Fantasy. For five years he was the editor of the John Joseph Adams Books novel imprint for Houghton Mifflin Harcourt.

"Every one of these 20 tales shines; there's not a lackluster one in the bunch. In her introduction, Machado declares her intention to ignore any artificial lines drawn between those stories considered "literary" and those labelled as "genre," and she says that her chief criterion in selecting these works was whether they provided her with pleasure. That doesn't mean these stories offer happy endings or simple answers. If there's one theme that unites them, it's the characters' desire to escape: from that haunted house...the restrictions of expected fictional tropes...racism and classism...misogyny and the associated bonds of social convention...and of course, foolish and dangerous preconceptions about the world that everyone holds in some measure (that's just about every story). A strong collection that will inspire, disturb, and, yes, give pleasure.” – Kirkus, STARRED review    "Experimental...literary, and...boundary-pushing...there’s a decidedly global, multicultural feel to these pieces, which exemplify diversity and representation. A masterful showcase of what’s possible."  – Publishers Weekly, STARRED review    "The stories selected by guest editor Machado for this acclaimed annual anthology reflect her commitment to interrogating the boundaries between literary and genre fiction, asking "what sort of pleasures does this story bring me" instead of "what category is this?" Among the many and varied pleasures of the collection are stories that share Machado's love of formal experimentation...this brilliant and beautiful collection is a must-read for those looking to enjoy the fullest range of narrative pleasure."   – Booklist, STARRED review —

Ummm, adorable?!?! Swan Lake: Quest for the Kingdoms is a high-energy mashup of famous fairy tales and classic ballets, retold in a fresh way with wonderful adventure, heartfelt messages about authenticity, and enough jokes and slapstick humor to keep it silly and joyful. Two princesses from enemy kingdoms lead our story, as they set out to find the truth of their kingdoms ongoing war, a curse, and so much more. Light yet exciting! (And to top it all off, one of the Kingdoms is called Montrose!!!)