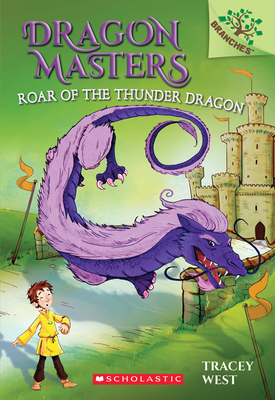 By Tracey West, Damien Jones (Illustrator)
$5.99
On Our Shelves Now

This is book number 8 in the Dragon Masters series.

A mysterious Dragon Master has kidnapped the Lightning Dragon!
Pick a book. Grow a Reader!

In book #8, Drake and the rest of the Dragon Masters are searching for Lalo the baby Lightning Dragon! Lalo was kidnapped by Eko -- Griffith's first Dragon Master. Eko ran away with her Thunder Dragon, Neru, years ago. Now she's back and she wants to kidnap every dragon in the kingdom! Can Drake and the other Dragon Masters rescue Lalo and stop Eko before it's too late?

Tracey West has written more than 300 books for children and young adults, including the New York Times bestselling Dragon Masters series, the Pixie Tricks series, and the Hiro's Quest series. She has also appeared on the New York Times bestseller list as author of the Pokémon chapter book adaptations. Tracey lives with her family in New York State's western Catskills. She can be found on Twitter and Instagram at @TraceyWestBooks and on Facebook at @AuthorTraceyWest.

Praise for Rise of the Earth Dragon (Dragon Masters #1):

"In this first of the Dragon Masters series, vocabularly is accessible; sentences, paragraphs, and chapters are short; and dialogue moves the story along rapidly. Black-and-white sketch-type drawings add depth to the story and feelings to the characters (both children and dragons). Emergent readers will find happy success here." -- Booklist

"The first of a new series of early chapter books, this entry is sure to attract fans. Brief chapters, large print, lots of action, attractive illustrations in every spread including a maplike panorama, an enviable protagonist -- who wouldn't want to be a Dragon Master? -- all combine to make an entertaining read. With plenty left to be resolved, the next entry will be eagerly sought after." - Kirkus Reviews

"These books should be considered for larger libraries wanting to enhance their easy-reader collections." -- School Library Journal