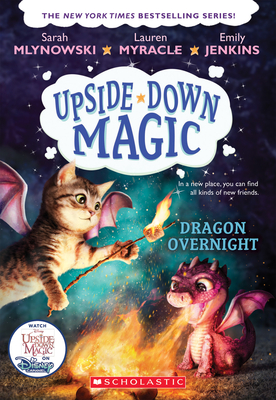 This is book number 4 in the Upside-Down Magic series.

The Upside-Down Magic kids are back in another topsy-turvy adventure in the next installment of this New York Times bestselling series, now a Disney Channel Original Movie!
Nory Horace can turn herself into a kitten. But sometimes she adds in a bit of dragon and, well, accidentally turns into a dritten. Oops? Her friend Andres Padillo can fly high . . . but then he can't fly back down again.
Nory and Andres are in an Upside-Down Magic class with other kids who have unusual magic.Now they're off on their first-ever overnight field trip! At Dragon Haven, Nory, Andres, and their UDM classmates get to swim with dragons, fly with dragons, and feed dragons. There's even a Hatchery, where they might get to see a newborn dragon.
There's only one downer. The UDM kids aren't the only ones visiting Dragon Haven. There are other students there, too. Students from another school. Students with "normal" magic. Dragon rescue, bonfires, and pajama breakfasts won't be nearly as fun with a bunch of snooty strangers.
Unless . . . maybe everything isn't as bad as it first seems. Thrown together with kids who are probably enemies, but might be friends, the UDM kids dive

Praise for the Upside-Down Magic series:

"Mlynowski, Myracle, and Jenkins have combined their considerable writing powers and experience to create an uplifting series launch that will charm young fantasy readers." -- Booklist

"The inventive tale is filled with a deftly balanced mixture of otherwordly effects, humor, and action. . . Appealing, warmhearted, and magical." -- Kirkus Reviews