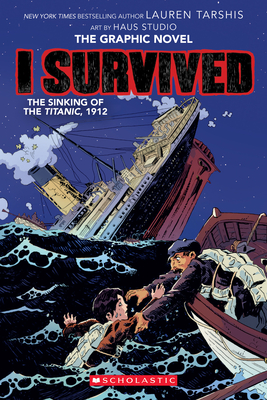 This is book number 1 in the I Survived Graphic Novels series.

A thrilling graphic novel adaptation of Lauren Tarshis's bestselling I Survived the Sinking of the Titanic, 1912!

Ten-year-old George Calder can't wait to explore every inch of the Titanic, even if his little sister, Phoebe, has to tag along. But when George sneaks away without her and ventures into the first class baggage room, a terrible boom shakes the entire boat. Suddenly, water is everywhere, and George's life changes forever...

Lauren Tarshis's New York Times bestselling I Survived series tells stories of young people and their resilience and strength in the midst of unimaginable disasters and times of turmoil. Lauren has brought her signature warmth and exhaustive research to topics such as the battle of D-Day, the American Revolution, Hurricane Katrina, the bombing of Pearl Harbor, and other world events. She lives in Connecticut with her family, and can be found online at laurentarshis.com.

Georgia Ball is an author and comic writer who has been lucky enough to work on most of her favorite childhood characters. She's written stories for Strawberry Shortcake, Frozen, Care Bears, Transformers, Littlest Pet Shop, My Little Pony, and many other popular brands. She's the author of two historical fiction graphic novels for Osprey Publishing, and she adapted Lauren Tarshis's I Survived the Sinking of the Titanic, 1912 and I Survived the Shark Attacks of 1916 into graphic novels for Scholastic. When she isn't writing words, she writes code as a front-end developer for mobile advertising. Georgia is also the author of two webcomics, Follipops and Scooter and Ferret on Webtoon. She lives with her husband, her daughter, two cats, and a dog in Washington State. For more information about her recent work, visit GeorgiaBallAuthor.com.

"The first installment of Tarshis' sprawling prose disaster oeuvre for young readers is reimagined in visually interesting full-color comic panels that support its recognizable thrilling pace and convenient twists. Many of the most exciting scenes are largely wordless, spotlighting the propulsive action amid growing tensions. A fresh and interesting adaptation, making for an easy crowd pleaser." -- Kirkus Reviews

"The original I Survived series already has lots of appeal for emerging readers, but this graphic adaptation of Tarshis' novel not only stays incredibly true to the original story but now provides another format in which to enjoy this high-interest and easily accessible piece of historical fiction. The illustrations nicely complement the plot-driven tone and softly show the historical horror appropriately for a young audience without minimalizing its tragedy... Readers will be poring over the pages to see what happens next, even if they're already familiar with the story." -- Booklist

Praise for I Survived the Destruction of Pompeii, AD 79:
"Tarshis serves up another gripping adventure... with the light-speed pacing and death-defying maneuvering fans have come to expect." -- Booklist

Praise for I Survived the Battle of Gettysburg, 1863:
"Informative and breathlessly paced." -- Kirkus Reviews

Praise for I Survived the Attacks of September 11, 2001:
"[Tarshis] crafts a dramatic, emotionally intense tale that takes account of 9/11's physical and emotional costs -- short- and long-term -- while ending on an upward beat." -- Kirkus Reviews

Praise for I Survived Hurricane Katrina, 2005:
"Expressive illustrations capture the drama of the storm and its aftermath, but the book's real power comes from its exploration of what it means to be a hero." -- Booklist

Praise for I Survived the Shark Attacks of 1916:
"A gripping story that will hold the interest of reluctant readers." -- School Library Journal

Praise for I Survived the Sinking of the Titanic, 1912:
"The fast pace and intrinsically fascinating disaster story will keep readers turning the pages." -- Kirkus Reviews