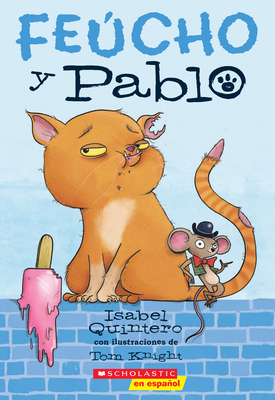 
Available to Order from Our Warehouse
From the 2015 winner of the ALA William C. Morris Award comes a humorous chapter book series about a not-so-attractive cat and his well-dressed mouse friend.Ugly Cat is dying for a paleta, or ice pop, and his friend Pablo is determined to help him get one by scaring a little girl who is enjoying a coconut paleta in the park. Things go horribly wrong when, instead of being scared, the little girl picks Pablo up and declares that he would make a great snack for her pet snake. Oh and there's also the small problem that Ugly Cat may have inadvertently swallowed Pablo in all of the commotion! Ugly Cat and his impeccably dressed mouse friend, Pablo, are an unlikely and dynamic duo who will win young readers over with their ridiculously silly antics and their search for tasty treats.Un dúo dinámico que se ganará a los lectores con sus divertidas aventuras. ¡Un libro perfecto para niños que ya leen de manera independiente!
Isabel Quintero is the daughter of Mexican immigrants. She lives and writes in the Inland Empire of Southern California, where she was born and raised. Her debut novel, Gabi, A Girl in Pieces, was the recipient of five starred reviews and several awards, including the 2015 Morris Award for Debut YA Fiction and the Tomás Rivera Mexican American Children's Book Award. For fun she reads and writes, watches comedies, and eats paletas and chicharrones every chance she gets. Her favorite paleta flavor? Pues coco, of course.