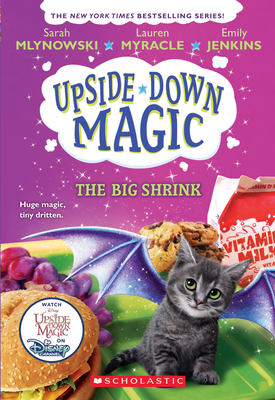 This is book number 6 in the Upside-Down Magic series.

The Upside-Down Magic kids are back in another topsy-turvy adventure in the next installment of this New York Times bestselling series, now a Disney Channel Original Movie!

Marigold Ramos can magically make things small - sometimes very, very small. The only problem? She can't figure out how to make them big again.

Maybe a new tutor can help Marigold manage her magic. And maybe her magic will come in handy as she and her friends in the Upside-Down Magic class band together to protest a new rule by their principal, a super unfair rule that bans them from bringing their amazing new toy dragons to school.

But when Marigold starts shrinking her friends and the class bunny, it's a humongous problem! It's time to figure out how Marigold and her friends can make a big statement... without disappearing entirely!

Emily Jenkins is the author of many chapter books, including the Toys trilogy (which begins with Toys Go Out) and the Invisible Inkling series. Her picture books include Lemonade in Winter, Toys Meet Snow, and The Fun Book of Scary Stuff. She would like to be a Flare and work as a pastry chef. Visit Emily at emilyjenkins.com.
Lauren Myracle is the New York Times bestselling author of many books for young readers, including The Winnie Years (which begins with Ten), the Flower Power series (which begins with Luv Ya Bunches), and the Life of Ty series. She would like to be a Fuzzy so she could talk to unicorns and feed them berries. You can find Lauren online at laurenmyracle.com.
Sarah Mlynowski is the New York Times bestselling author of the Whatever After series, the Magic in Manhattan series, Gimme a Call, and a bunch of other books for teens and tweens, including the Upside-Down Magic series, which she cowrites with Lauren Myracle and Emily Jenkins and which was adapted into a movie for the Disney Channel. Originally from Montreal, Sarah now lives in Los Angeles with her very own prince charming and their fairy tale-loving daughters. Visit Sarah online at sarahm.com and find her on Instagram, Facebook, and Twitter at @sarahmlynowski.

Sharing a bunk bed, kit fox siblings, Fritz and Franny, think their side of the bunk is best and squabble about who is right in this delightfully fun romp of a series by talented author/illustrator Tina Kügler. Young readers will chuckle, chortle and see themselves in the imaginative antics of Fritz and Franny, with a continuing cameo by expressive Fred the dog.