No, David! (David Books) (Board book) 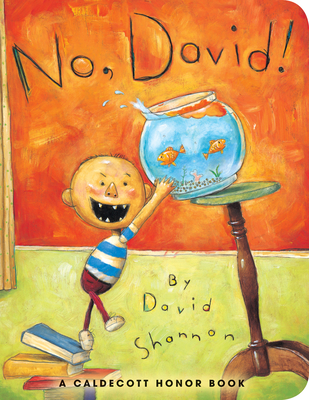 America's favorite trouble maker will fill your home with good-natured laughter in this brand-new board book that celebrates 20 years of the bestselling, Caldecott-winning classic!
When David Shannon was five years old, he wrote and illustrated his first book. On every page were these words: NO, DAVID! . . . and a picture of David doing things he was not supposed to do.
Now David is all grown up. But some things never change. . . .
Twenty years after its initial publication, No, David! remains a perennial household favorite, delighting children, parents, and teachers alike. David is a beloved character, whose unabashed good humor, mischievous smile, and laughter-inducing antics underline the love parents have for their children -- even when they misbehave.

David Shannon is the internationally acclaimed creator of more than 30 picture books, including iNo, David!/i, a Caldecott Honor Book and his second iNew York Times/i Best Illustrated Book of the Year, and four more David picture books. Shannon's bestsellers include iA Bad Case of Stripes/i, iDuck on a Bike/i, and iToo Many Toys/i. His most recent book was the iNew York Times/i bestseller iGrow Up, David!/i. He lives in Southern California with his family and Roy, their West Highland White Terrier.