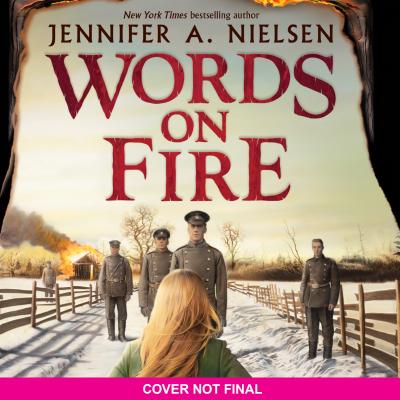 Nielsen's always first-rate historical fiction, this one about the early 20th century Lithuanian struggle against the Cossack occupation and censorship of Lithuanian culture, traditions and banning of books, hums along at a pace which will endear action/adventure fans into turning pages. Some scary situations -- beatings, villages set on fire and constant surveillance -- make the book a better fit for at least ages 9 and up.

New York Times bestselling author Jennifer A. Nielsen transports readers to a corner of history with this inspiring story of a girl who discovers the strength of her people united in resisting oppression.
Audra lives on a quiet farm in Lithuania, but she understands that danger is never far away. Her parents warn her to stay close to home and avoid the patroling Russian Cossack soldiers. The Russians, who occupy Lithuania, insist that everyone there must become Russian -- they have banned Lithuanian books, religion, culture, and even the language.

But Audra knows her parents are involved in something secret and perilous. When Cossacks arrive abruptly at their door, Audra's parents insist that she flee, taking with her an important package and instructions for where to deliver it. But escape means abandoning her parents to a terrible fate.

As Audra embarks on a journey to deliver the mysterious package, she faces unimaginable risks. In hopes of rescuing her parents, she becomes caught up in a growing resistance movement, eventually joining a network of book smugglers: Lithuanians intent on preserving their language, history, and culture. She will become... a Carrier.

Jennifer A. Nielsen is the acclaimed author of the New York Times and USA Today bestselling Ascendance Series: The False Prince, The Runaway King, The Shadow Throne, and The Captive Kingdom. She also wrote the New York Times bestselling Mark of the Thief trilogy: Mark of the Thief, Rise of the Wolf, and Wrath of the Storm; the stand-alone fantasy The Scourge; the historical thrillers A Night Divided, Resistance, and Words on Fire; the second book in the Horizon series, Deadzone; Book Six of the Infinity Ring series, Behind Enemy Lines; and The Traitor's Game series: The Traitor's Game, The Deceiver's Heart, and The Warrior's Curse. Jennifer lives in northern Utah with her husband, their children, and a perpetually muddy dog.