The Block (The Second Book of The Loop Trilogy) (Hardcover) 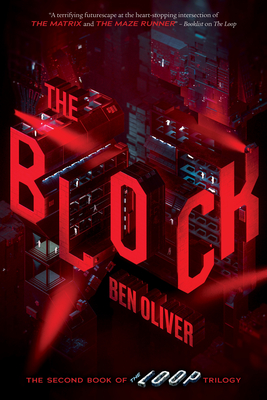 This is book number 2 in the The Loop series.

In the second book of The Loop trilogy, Luka is trapped in a fate worse than death. But now that he knows the truth about what he and his fellow inmates are being used for, it's more important than ever that he not only escapes, but that he builds an army.

Luka is a prisoner once again. But this time it's a fate worse than death. In the Block, he must toggle between enduring an Energy Harvest for twelve hours of the day and surviving complete immobilization. The only semblance of relief is the Sane Zone, created to keep prisoners from going completely mad. In this virtual reality, the prisoners live out their fantasies of life outside. But for Luka, it's different.

Happy is determined to find out the location of his friends, who disappeared after the Battle of Midway Park. But can Luka battle the descent into madness long enought to stop Happy's manipulation tactics and keep his friends' location safe?

Another prison break is the only chance to protect the Missing. And as reality becomes increasingly scrambled on the outside, it'll take an army to stop Galen from carrying out his plans.

Praise for The Loop:

"With plenty of appeal for fans of a good dystopian tale, this book won't spend much time on the shelf" -- School Library Journal (Starred Review)

"Like Divergent and The Maze Runner, this title pulls the reader into a futuristic world where nurturing friendships is important but the need for survival puts them at odds." -- School Library Journal