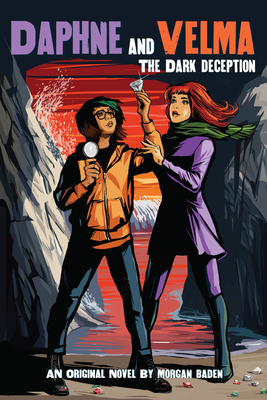 This is book number 2 in the Scooby-Doo! series.

It's the classic girl detectives like you've never seen them before! Daphne Blake and Velma Dinkley have a terrifying new mystery to solve and this time, the culprit is far more frightening than any man in a mask...

Despite their differences, Daphne and Velma were able to solve the mystery of The Vanishing Girl. But there are a lot of secrets buried in the town of Crystal Cove. Including one the Vanishing Girl herself (aka Daphne's friend Marcy) asked them to look into-what deep dark secret is their old friend Shaggy Rogers trying to protect?

The two teen detectives have barely started investigating that case when another mystery strikes. Hundreds of valuable gems begin washing ashore, and soon everyone is convinced it's a sign from the Lady Vampire of the Bay, a ghostly creature who's said to have haunted the town a hundred years earlier.

Daphne and Velma are convinced there's a logical reason the jewels have appeared, and they're determined to find out what it is. But asking questions about Crystal Cove's legends can be dangerous. It seems like everyone in town has something to hide . . . especially the families who've profited off the town's mysterious past. Can the girls discover what's lurking behind all this dark deception?

Morgan Baden's debut Young Adult novel, The Hive, co-written with her husband Barry Lyga, was named a Best Book of Fall 2019 by People magazine and was called "a gripping, tense, action-packed thriller" by Booklist. An established and bestselling ghostwriter, Morgan is also a communications consultant who has led social media and internal communications for iconic children's book brands. She lives in New Jersey with her husband and two children.